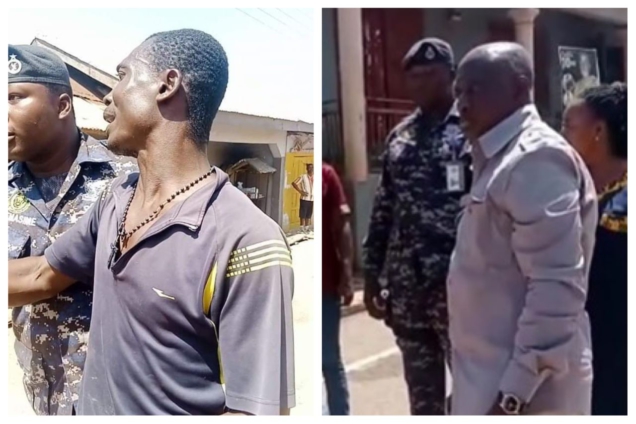 A 42-year-old farmer has been arrested for challenging a directive of the Ashanti Regional Minister for farmers to stop drying their cocoa beans on a newly-constructed road.

One side of the road at Ntobroso in the Atwima Mponua District was covered with undried cocoa beans, a practice that can cause accidents and affect the longevity of the road.

The Regional Minister, Simon Osei Mensah, who was on road inspection, asked the farmers to move the beans off the road.

When a cocoa farmer decided to dry cocoa beans on an asphalted road in a town, blocking one lane of the road and the Ashanti Regional Minister, Simon Osei Mensah chanced on it and was irritated by the action of the owner of the cocoa beans. pic.twitter.com/qlIgdxrwVO

It is however alleged suspect Dominic Adu Boi, who was helping remove the beans, unruly retorted the minister’s directive.

The man is alleged to have said that the drying of cocoa beans on the road was not illegal mining for those indulged in it to be reprimanded.

Dominic further insisted whoever is arrested in the act will be released to return to drying the beans once the Minister had left the road.

In a viral video, the Minister, who was supervising the removal of the beans, was infuriated by the comments and called for arrest of Dominic.

The police escort with the team moved to effect the arrest.

The man was later sent to the Regional Police Headquarters where an official complaint was made.

Luv News investigations indicate a delegation from the community followed up to Kumasi with a request for bail which has since been granted.

The newly constructed road is part of Synohydro Road projects being constructed in the country.

The Minister as part of the visit toured some roads the communities had requested to be fixed.

Simon Osei Mensah advised the public to desist from harming road projects since it has a negative impact on the economy.

DISCLAIMER: The Views, Comments, Opinions, Contributions and Statements made by Readers and Contributors on this platform do not necessarily represent the views or policy of Multimedia Group Limited.
Tags:
Cocoa beand
Simon Osei-Mensah