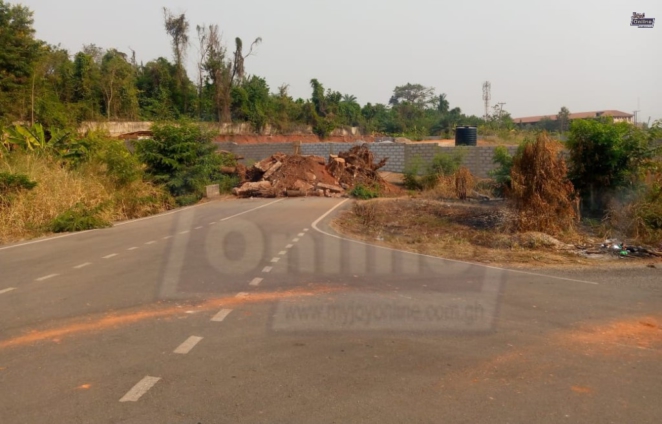 The Ashanti Regional Minister, Simon Osei-Mensah, has explained that government di not incur any no cost in the construction of the road blocked by a private developer at Denyame in Kumasi.

He revealed that the area was given to a construction company, Cymain Construction, for testing end-products of an asphalt plant.

“The contractor put up an asphalt plant and needed a place to test the end product, so Urban Roads gave them that length of road to construct and that is the cause of this problem.”

Mr. Osei-Mensah was responding to questions raised by JoyNews’ Nana Yaw Gyimah in an interview, over cost incurred by the state in constructing the wrongly sited road.

“Directly, there is no financial loss to the state, what someone will say is that, maybe, if the urban road had done a bit of due diligence, they could have asked the contractor to try it on a different road,” he said on Friday.

A concrete wall was built in the middle of an asphalted road, about 100 metres into the detour linking the State Experimental School to the Urban Roads Office and Regional Coordinating Council.

The asphalted road was destroyed by a private developer, claiming ownership to the piece of land through which the road is constructed.

Motorists and school children who often used the route are forced to turn after spotting the blockade.

According to the Regional Minister, attempts to restrain the private developer from pulling down the wall failed. This was after the owners of the land provided documents.

“I don’t have any legal right to stop him. Upon which law do I go to court when the person has all the legal title to the land?” he queried.

In a separate interview with the media, the Regional Minister indicated that the asphalted road, which has been blocked, was illegally constructed; hence, the developer cannot be stopped from continuing his project.

According to him, an interaction he had with the Regional Lands Officer disclosed that the developer has full access to the area, saying no action can immediately be taken against the developer.

“I called the Regional Lands Officer, and I’m informed that that place wasn’t a road, so the road was constructed illegally. I had no authority on the land and if I decided to stop the developer, it will lead to judgement debt to the government.”