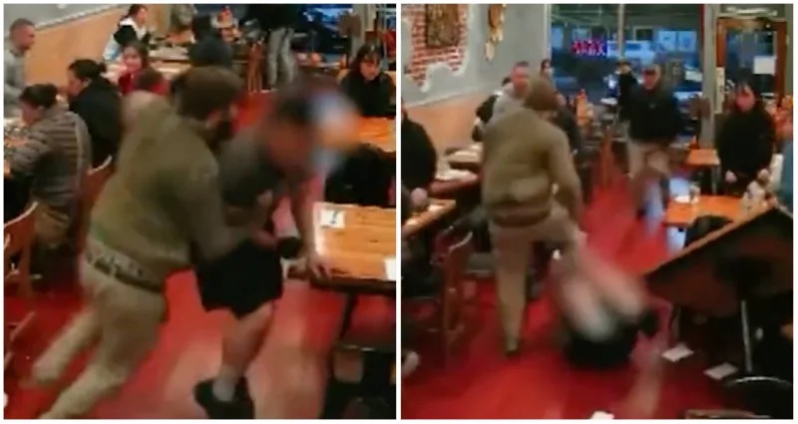 A customer was captured on surveillance footage physically attacking the nephew of a Thai restaurant owner in Berkeley, California after he was reportedly denied free food.

The nephew was allegedly attacked after he tried speaking with the customer to see what the problem was, according to ABC7.

In the now-viral video, the customer can be seen near the bottom of the screen kicking and flipping the nephew over a table before he kicks him in the stomach when he falls to the ground.

The perpetrator then runs toward the exit, but witnesses in the restaurant acted swiftly to stop him from leaving.

An owner of the small family-run restaurant, Sarah told me the susp said he did what he did b/c of a death in the family.

Sarah says this has never happened in the decades of being in business & feels like #StopAsianHate.

She’s grateful for the men who helped save the day! pic.twitter.com/lL4XvYDqFJ

While many customers hid in the restroom or in the kitchen of the restaurant, two diners reportedly helped hold the man and waited for Berkeley police to arrive.

“This is the first time we’ve seen this incident. It was quite a shock and everyone was scared,” one of the restaurant owners, identified as Sarah, told ABC 7.

According to Berkeley police, the customer has been arrested for serious felony assault.

Sarah said that the man acted the way he did because of a death in the family.

In a message to the people who jumped into action during the incident that was relayed to ABC7, Sarah said: “Just want to say thank you so much for your help and you’re very kind. You didn’t hesitate to help us on that day. If that day nobody did anything, the man could have gotten away. Really, really appreciate you being our customer and being a good Samaritan.”

The good Samaritans were also praised on Twitter for immediately standing up.

“Those two customers are absolute HEROES for what they did. So many people would have just let him walk out the door,” one user wrote.

Other viewers questioned the actions of the customer.

DISCLAIMER: The Views, Comments, Opinions, Contributions and Statements made by Readers and Contributors on this platform do not necessarily represent the views or policy of Multimedia Group Limited.
Tags:
California
free food
Restaurant owner's nephew