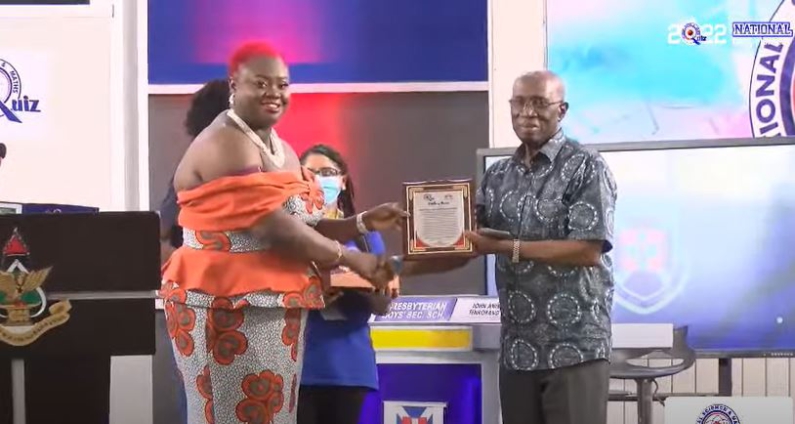 Prof William A. Asomaning [right] receiving the citation of honour

The cheers, applause and appreciation were just overwhelming in the KNUST Great Hall when the longest-serving National Science and Maths Quiz (NSMQ) chemistry consultant was honoured.

Since 1993, when Primetime Limited started the NSMQ productions, Prof. William Asomaning has been one of the great brains behind the coveted national contest.

He was a member of the consulting team and was solely responsible for the head-aching chemistry questions contestants wracked their brains around on the famous stage.

Guess what? On Wednesday, October 26, 2022 at the Grand Finale of the 2022 edition of the NSMQ, his face was officially revealed amid massive applause in an atmosphere of awe and admiration.

The legendary professor received the highest distinction for his diligence, hard work and his “efforts to make the study of chemistry exciting to senior high school students and provide guidance to teachers through the NSMQ.”

A citation of honour was presented to him to appreciate the integral role he played in the development and growth of the NSMQ.

Indeed, he would be missed for his “beautiful questions.”

Prof William Asomaning received the honour at the closing ceremony of the 2022 NSMQ, which took place on Wednesday, October 26.

The Presec-Legon boys successfully fought off Prempeh College’s threats of equalling two of their records in one swing.

A lot was on the line and the Legon boys fought for all of it. They came, they saw and they conquered.

For the seventh time, they cemented their record in the NSMQ.