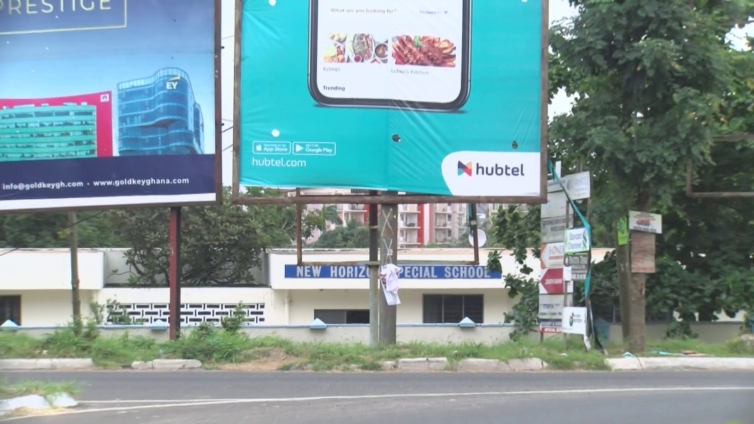 Located at Cantonments, a suburb of Accra, the New Horizon Special School is a learning facility for pupils with special needs.

Authorities of the school say the presence of huge billboards interlocked with electricity wires puts the lives of the special needs children at risk and wants city authorities to have them relocated.

JoyNews visited the school. In an interview with the Deputy Principal, Joselyn Adoboe, she revealed that two of the billboards fell, one on the kids’ playing ground and the other on the main playing ground.

“We have about nine billboards in front of our school and its posing a lot of threat to the lives of our children and also property of the school”, she said.

“This is a plea to the municipality to take action so that the billboards are relocated so that there will be visibility and no more threat to property and lives of children of the school”, she added.

The Assembly Man of the area, Alhaji Bashiru Mahama explained that the delay in response has been occasioned by the process that it takes to have billboards removed.

He also disagrees with the school’s position that the billboards present a big risk to life, stressing further that the parcel of land on which the billboards have been mounted does not belong to the school, hence the need for tact in handling the matter.

“That land in question is not the schools’ land so the school doesn’t have authority on that land”, he said.

“I am not saying that the school is not paying anything to the Assembly so we should not take care of the school, it is a special school that needs more attention”, he added.