Manasseh Azure Awuni: There was Achebe, and there is Chigozie 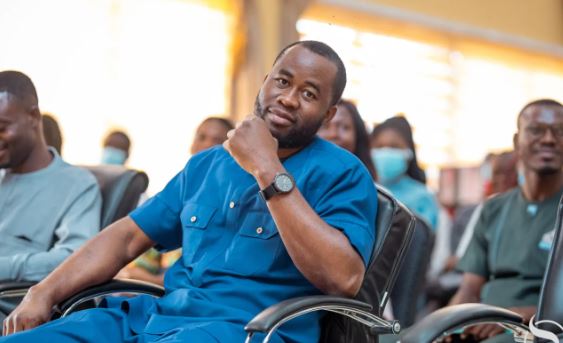 Those who know me, even from afar, know that I love borborbor music. And those close enough to know my love for literature obviously know that my adoration of Chinua Achebe is nearly enough to evoke the envy of the “jealous” Old Man above.

I encountered Achebe in secondary school. The 2004 batch of students in Ghana that sat the West African Secondary School Certificate Examination were examined on two books for our core English Literature. We read Efua T. Sutherland’s play, The Marriage of Anansewa. For prose, it was Chinua Achebe’s Things Fall Apart.

In Krachi Secondary School, Things Fall Apart was more than a novel. It was a being that lived in us and among us students. It was with us in the classroom, the dormitory and in the dining hall. When we mowed grass or engaged in any hard work, we had the lazy ones to remind us of Okonkwo’s father, Unoka.

The proverbs and the powerful expressions in that book were part of the everyday chants and banter that spiced our boarding lives.

An English Language teacher who mistakenly said “Okwonka” instead of “Okonkwo” regretted ever teaching the subject. Back in the dormitory and, out of the earshot of teachers, the year group ahead of us whose class the teacher had slipped his tongue, had variations of the slip, which they attributed to the teacher. It often began with one person shouting “Okwonka!” and that would trigger a chain of responses such as “Olonka!”, “Ofwonlo” or anything that had enough sound to rhyme with any part of the name.

Some of us believed it was part of the reasons the said teacher sought and was granted a transfer to Kadjebi Asato Secondary School, leaving the entire school with only one substantive English Language teacher.

My interest in Achebe did not wane after school. It grew. If my reading habit and love for literature could be likened to being born a Christian, it was Achebe who baptised me with the Holy Spirit.

I read anything I found to have been written by Achebe. At a point, he was one of three personalities I desperately wanted to meet one day. The other two were Nelson Mandela and Jesus Christ. (I missed the two who died in my lifetime.)

Achebe did not only tune my young mind in the direction of literature. He and others gave me a perception, a positive prejudice about Nigerians.

My first encounter with Nigerians was with its writers such as Achebe, Wole Soyinka, Elechi Amadi, Chukwuemeka Ike, Ola Rotimi and Buchi Emecheta among a host of great writers. In those formative years, I considered Nigerians more highly than Ghanaians until I discovered, through their politicians, that what is often considered the sleeping giant of Africa is a bloated beast amputated by corruption, bad governance and all the self-inflicted ailments to which excessive greed can reduce an otherwise prosperous and talented people—a monumental failure.

That discovery has, however, done nothing to dim my admiration for Nigeria’s writers. And it all began with one man—Chinua Achebe—the name that is part of my personal email addresses.

Achebe is considered the father of African fiction. And, as one of his ardent worshipers, I would have considered it sacrilegious if someone had elevated any African writer above Achebe. But one day, I made a remark that surprised my colleagues at The Fourth Estate.

I told them of a writer whose second novel I had read and said I had seen visible signs of someone who appeared to be greater than Achebe.

As Achebe’s “idolator”, it was one of the hardest things to ever come out of my mouth. But that’s how I felt after reading An Orchestra of Minorities by Chigozie Obioma.

I was sedated by the writer’s audacious style, enchanted by his depth and enraptured by the sheer beauty of his writing.

An Orchestra of Minorities is written in the first-person narrative, but instead of the main character being the storyteller, it is his chi or his guardian spirit that tells the story about its host. That spirit, which has the benefit of reincarnation, establishes a deeper and more intimate connection between the reader and the main character and creates a dramatic irony that helps the reader to appreciate Nonso’s struggles through the maze of problems he’s confronted with.

His first novel, The Fishermen, is a moving family drama of siblings whose love turned into hate after the gloomy prophecy of a mad man.

I will not pretend to possess any prowess in the appreciation of literature, but as a reader, I have discovered two types of good writers. There are writers whose plots contain the twists and turns of Ronaldinho or Messi, the kind of skills that set the stadium ablaze with tumultuous ululations.

There is also another class of writers whose works can be compared to Zinedine Zidane and other midfield giants, whose movements are hardly perceptible but make classic case studies of maturity in the game. I place Chigozie Obioma, whose debut novel and second novels were both shortlisted for The Booker Prize, in this category.

After the first generation of African writers such as Achebe, Soyinka and Ngũgĩ wa Thiong’o, I had come to appreciate the works of their fitting replacements such as Chimamanda Ngozi Adichie and Teju Cole. I have since heard some of these writers being described as heirs to Achebe, but after reading An Orchestra of Minorities, I agree with the New York Times that “Chigozie Obioma truly is the heir to ­Chinua Achebe.”

Chigozie, who made The Booker Prize shortlist for a novel he wrote in his 20s, later told the Daily Trust newspaper in Nigeria that he felt “somewhat embarrassed” about the comparison with Achebe.

“Achebe was a glorious writer who helped shape African fiction as we know it today. More so, he helped birth so many writers through his African Writers’ Series. For anyone to purport to wear his garment is pretty audacious, at least for a first book,” he said.

While reading the book, I did not ascribe the depth and audacity of style in An Orchestra of Minorities to someone who was born in 1986. That was, perhaps, what heightened my admiration for Chigozie when I went online to find out more about him. The more I discovered about this writer, the more hopeful I became of the future of African literature.

Chigozie Obioma is the James E. Ryan Associate Professor of English and Creative Writing at the University of Nebraska-Lincoln and divides his time between the US and Nigeria.

His two novels, The Fishermen (2015) and An Orchestra of Minorities (2019) were shortlisted for The Booker Prize. His novels have been translated into more than 29 languages.

They have won awards including the inaugural FT/Oppenheimer Award for Fiction, the NAACP Image Award, the Internationaler Literaturpreis, and the LA Times Book Prize, and have been nominated for many others. The Fishermen was adapted into an award-winning stage play by Gbolahan Obisesan that played in the UK and South Africa between 2018-2019.

Chigozie Obioma was a judge of The Booker Prize in 2021.

He was named one of Foreign Policy’s 100 Leading Global Thinkers of 2015.

Human civilisation appears to have leaped beyond the wildest imaginations of some of the biggest dreamers that ever lived. But certain things, such as reverence for old age may never change. Comparing the abilities of a young man to that of an old and accomplished pioneer is bound to hurt the sensibilities of many.

Chigozie Obioma is working on his third novel, but with the weight of his first two, one can confidently say the flame of authentic African literature remains unquenchable with the likes of him still in the arena.

And those of us who mourned the irreplaceable loss of the colossus Achebe are comforted by the consoling fact that there is Chigozie.