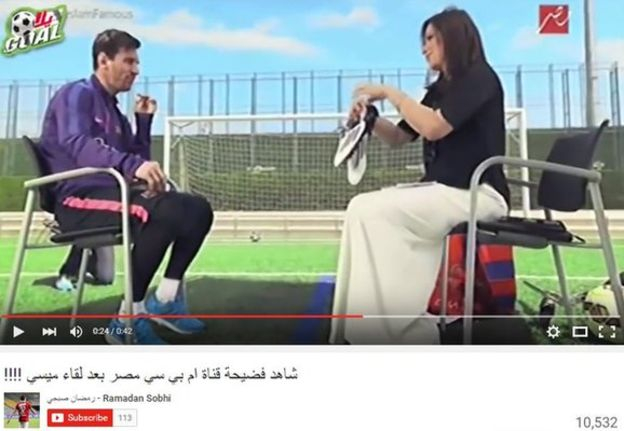 The world's most famous footballer donates a pair of his boots to a charity auction, what's not to like? Plenty it seems, depending on the cultural context, as Barcelona star Lionel Messi has been discovering after his generous gesture managed to upset some Egyptians.

It was only a few weeks ago that Messi was widely praised for making a young fan's dream come true when he sent a shirt and a football to a young Afghan boy – a story in which BBC Trending played a small role.

However, when the player made a similarly well-intentioned gift on Egyptian TV this week it was regarded by some as a national insult.

During a TV interview with the "Yes I am Famous" show, broadcast on MBC's Misr Channel, the Argentine footballer told the presenter he would like to donate his football boots to be auctioned off for charity.

What Messi seems to have failed to appreciate is that in Egypt and other Arab countries in the region shoes can be used as a symbol of disrespect or insult. So some Egyptians took offence and turned to social media to express their anger.

"This is the most disgusting. He was paid thousands of dollars and at the end he donated his shoes and the stupid presenter was happy," tweeted one user called @Sala77ar7ash. Another user called @sulimanahmad670 commented: "Egypt's name is greater than Messi's shoes. This is a big insult to Egypt," wrote @sulimanahmad670.

In Arab culture, showing the soles of your shoes can be seen as especially insulting. The Arabic expression "to hit someone with a shoe" is offensive. You might remember the case of Iraqi journalist Muntasir al-Zaydi, who threw his shoes at President George W Bush in protest at a press conference in Baghdad in 2008. 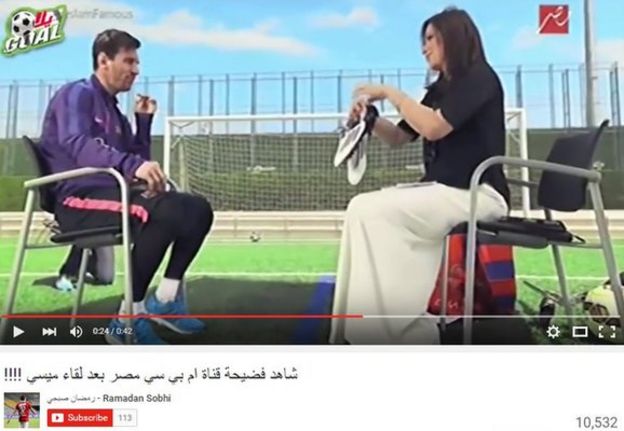 Image caption Some believed presenter Mona al-Sharqawi should have refused the donation.

The shoe can be considered dirty because it is on the ground and associated with the foot, the lowest part of the body. So some people have taken issue with the fact the TV presenter, Mona al-Sharqawi held Messi's donated boots with her hands. "Wake up Arabs and smell the coffee. No time for sleeping. She [the presenter] should have refused this insignificant donation," tweeted @awatifalqaisey.

In response to the perceived insult, Egyptian MP Said Hasasin who presents a programme called "Infirad" (Exclusive) on private Al-Asimah TV, went so far as to take off his shoes on air saying he would donate them to Messi. 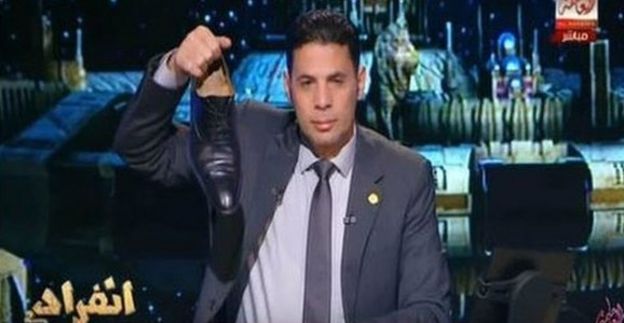 But opponents of Egyptian President Abdul Fattah al-Sisi also seized on the situation as a way to attack the government. A hashtag which translates as "Messi's_shoes_to_AlSisi's_people" has been used more than 15,000 times.

The pro-Muslim Brotherhood "Rabi'ah's Pulse" Facebook page published a video of the presenter receiving Messi's shoes' donation and wrote: "It is not only an insult to Egypt, but rather humiliation to the military gang that killed the innocent and kidnapped President [Muhammad] Morsi."

However, some wondered why the president's name was being linked to the issue. "Why you put Al-Sisi in anything happening?" one Twitter user @moody7amada wondered.