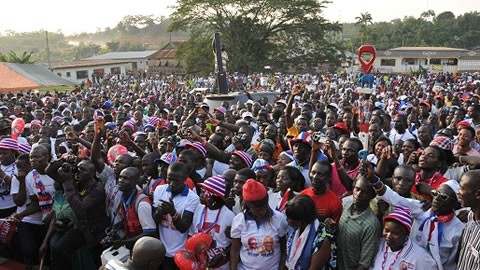 Residents in the Upper Denkyira East and West constituencies of the Central Region are not happy with, what they describe as, the poor performance of President John Evans Atta Mills and his ruling National Democratic Congress administration and have vowed to show them the exit come December.

They lament that President Mills, who hails from the region has showed total neglect of the region and has sat back unconcerned as the people of the region continue to wallow in poverty, growing levels of unemployment coupled with the spiraling cost of living.

Kwesi Afum, 47, a resident of Dunkwa said “President Mills during the campaign of 2008 promised to reduce cost of living and help make our lives better but as president he has rather brought us unprecedented hardships and we will vote him and his government out.”

These concerns were put across when the 2012 Presidential Candidate of the New Patriotic Party (NPP), Nana Akufo-Addo, toured both constituencies, Friday and Saturday as part of his ‘hope tour’ of the Central Region.

The NPP leader’s visit to the various communities was met with excitement and jubilation as residents took turn to exchange pleasantries with the man most political pundits tout as Ghana’s next President.

Chiefs and community leaders took turns to outline their concerns and disappointments with the NDC government to the NPP Presidential Candidate.

Elders of Dunkwa Zongo pleaded with Nana Addo to improve their living standards when he becomes president.

One resident of the Dunkwa, Alhaji Abass, in his interaction with Nana Akufo-Addo and his team said: “We did a lot to bring the NDC to power but they have neglected us. President Mills said he will care for us but he has not. He promised a ‘Better Ghana’ for all of us but it has only become better for the Ministers, functionaries of the NDC and his friends”.

Nana Akufo-Addo has been assuring the people that Ghana can be put back on the pedestal of growth and development if the right leadership is brought back to build on the solid foundation laid by President Kufuor.

The NPP flagbearer explained that unless Ghana industrialises with the goal of adding significant value to our primary products, be they heavy or otherwise, the country cannot create the necessary numbers of high-paying jobs that will enhance the living standards of the mass of Ghanaians.

“Raw material producing economies do not create prosperity for the masses. The way to that goal, the goal of ensuring access to prosperity, is value addition activities in a transformed and a diversified modern economy,” he added.

He observed that a dangerous future awaits the Ghanaian society if nothing is done about the alarming rates of unemployment.

The NPP leader has also been reminding the people of his commitment to providing free senior high school education for all. He says any county that is serious about reducing poverty levels must tackle the matter of illiteracy, “and that is one of my major priorities.”