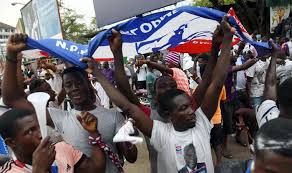 He urged the committee members to embark on a house-to-house campaign to market the good policies and programmes of President Akufo-Addo-led government to the people to vote for the party in the December 7 polls.

Mr Adjei Baffoe was speaking during the inauguration of a 29-Member election 2020 Campaign Committee for the Gomoa Central Constituency at Gomoa Aboso.

He added that the 2020 campaign approach would be different from that of 2016 because it is going to be issue-based.

The Deputy Minister charged the committees to go the extra mile in their campaign in the constituencies and the region to retain the 19 Parliamentary seats won in 2016 and to win the presidential vote in addition.

According to the Deputy Minister, the Central Region NPP had set a target of 60 per cent votes in the December 7, Presidential and Parliamentary elections.

He charged the campaign Committee members to double their efforts in order to win more seats for the party.

Mr Adjei Baffoe commended the Member of Parliament (MP) for Gomoa Central, Mrs Naana Eyiah Quansah for her determination in bringing infrastructural development into the Constituency.

He said Ghanaians had witnessed development across various sectors in the country. He cited the free Senior High School policy, NABCO, free water and electricity bills during the height of the Coronavirus pandemic, planting for food and jobs and many others targetted at improving the socio-economic advancement of Ghanaians as some of the many achievements of the NPP government.

Mrs Quansah, who is also the Deputy Minister of Lands and Natural Resources, urged the Campaign Committee Members to work hard to achieve the Party’s primary objective.

She called on the party supporters and Campaign Committee Members to eschew hatred, disunity, the pull-him-down syndrome, selfish interests and other issues that could breed disaffection for the party in the upcoming elections.

The MP said the Campaign Committee Members must strive hard to break the record of a one-term MP in the Gomoa Central Constituency.

The District Chief Executive for Gomoa Central, Mr Benjamin Kojo Otoo, said the NPP and President Akufo-Addo had done enough developmental and infrastructural works for the constituency, as such it was important to vote for the party to continue the good work.

He said the Campaign Committee’s main agenda was to focus on victory for the party, adding that without hard work it would be difficult to win the December 7 polls.

The Gomoa Central Constituency Chairman and chairman of the Campaign Committee, Alhaji Omar Adams, said the members would ensure the Party’s wins in the election.

He said the committee will work to increase the NPP’s votes in the 2020 election to 70 per cent to defeat the National Democratic Congress (NDC).