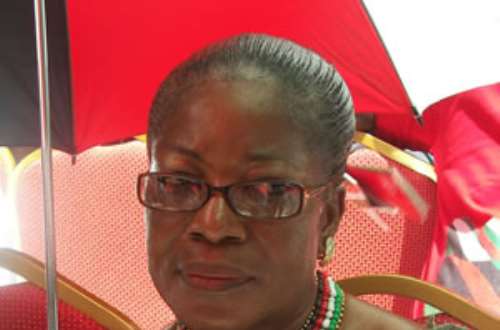 Former MP for Gomoa West and Central Regional Minister, Ama Benyiwa Doe, has passed on, a family source has confirmed to Joy News.

The vociferous politician served as National Democratic Congress MP from 1992 to 2004.

In May this year, she commented on the disagreement between the party involving Bernard Allottey Jacobs.

The former member of the Council of State during John Mahama administration said the party’s former Regional Chairman recent rants would not affect the party in any way.

“Allotey doesn’t have any influence on the NDC; he only adds up to the numbers,” she told Akoma FM.

She said the suspended member of the party only joined the NDC to enrich himself.

“Allotey Jacobs’ sole interest was to make money [and] now he feels he is okay, so he is biting the hand that fed him,” she said.

She was once a National Women’s Organiser of the NDC.

In a Facebook post, the 2020 NDC flagbearer wrote, “I have received with deep sadness, news of the demise of one of the most inspirational icons to have served our party, the NDC, and this great nation.

“She was not only a politician, but also a gender activist and champion of women’s rights. Ama Benyiwa Doe was an embodiment of limitless courage, commitment and passion for service.

“May her soul rest in eternal glory.”