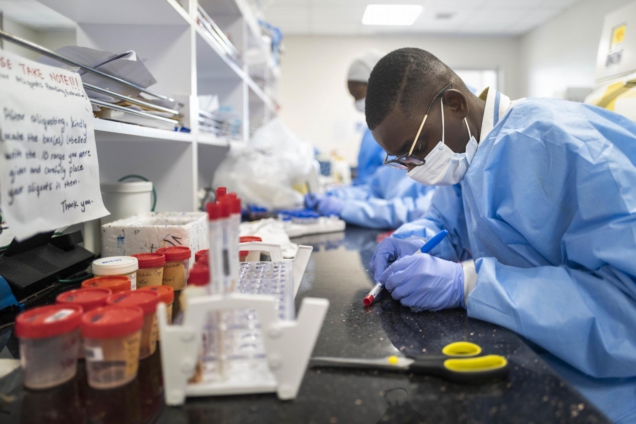 Ghanaian scientists have provided even more details on the new variants of Covid-19 in the country and their relationship with the current resurgence in new cases.

The West African Centre for Cell Biology of Infectious Pathogens (WACCBIP) at the University of Ghana has revealed that one of the virus’ new strains which mutated in the United Kingdom is currently driving the new infections being recorded locally.

President Akufo-Addo had announced in January that a new variant of the novel coronavirus had been detected among travelers who had been isolated to prevent the spread.

However, the Director of the WACCBIP suggests that findings point to a considerable spread of the contagions.

According to Dr Gordon Awandare, the “data shows clearly that B.1.1.7 (first reported in UK) is now the predominant strain driving local transmission in Ghana.”

This was his conclusion after the Centre’s January sequencing of samples processed from their sampling sites across the country.

Also known as B.1.1.7 SARS-CoV-2, the variant is one of a few mutated strains of the virus which scientists say could be potentially more contagious and has already spread to over 70 countries worldwide.

Already, Public Health Expert and Adjunct Professor at New York University, Nana Kofi Quakyi had described the situation as alarming and wished the development would trigger the needed caution to drive efforts to contain the spread.

Tbvh this is the single most important #COVID19 story today.

Hope it gets the appropriate media coverage (with informed context) so the public can understand the urgency of compliance and caution right now. https://t.co/RfwN6kES7q

In a post on Twitter, the expert suggested aggressive testing to suppress the transmission if the latest development is anything to go by, considering the higher mortality rate associated with the new strain.

Precisely. Add to that a ~65% higher mortality risk, ICUs already at capacity, and a long road to full vaccination and you realize the game is now about aggressive suppression of transmission. In the short term, all other considerations are secondary.

Meanwhile, 791 more persons have contracted the novel coronavirus bringing the country’s number of active cases to 6,095.

Nine new deaths put the death toll at 449 as the cumulative infections hit 70,046 with 63,502 recovered/discharged.