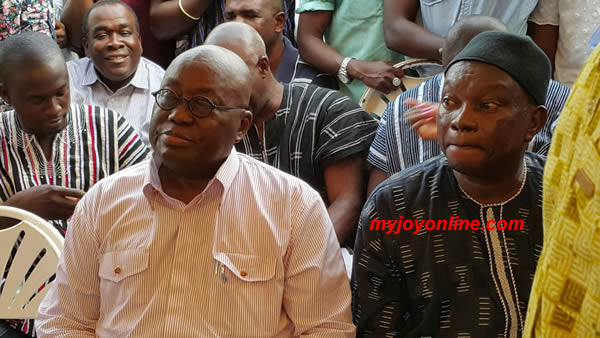 The 2016 NPP flagbearer Nana Akufo-Addo has described the murdered NPP activist, Abubakar Saddiq, as “a personal friend” as he mourned with the family of the deceased.

At a ceremony to mark one week after his tragic death, Nana Addo said Saddiq was always close to his entourage whenever he visited the Ashanti region.

He has donated GHC 2,500 for the funeral rites of Saddiq which has been slated for November 22,Joy News' Ashanti regional correspondent Prince Appiah reported.

Abubakar was killed last week Friday after assailants wielding machetes slashed him in broad day light. The pro-Nana Addo supporter was part of a group of party activists who closed down the constituency office in protest over comments made by the constituency chairman Isaac Brenya.

Photo:The Asawase constituency office of the NPP was the scene of protest

After the protest was staged Friday morning, two men attacked a defenseless Saddiq later in the afternoon. Police have arrested two party executives who have since been arraigned. The constituency chairman is also assisting with investigations.

There was a large gathering at the Asawase residence of the deceased as party supporters followed Nana Addo.  Nana Addo condemned a growing resort to political violence in the party.

He demanded that there be no more bloodshed in the party. Saddiq is the second victim of political violence in the NPP this year after Upper West regional chairman of the party Adams Mahama was killed in an acid attack on May 20.

Father of the deceased asked Nana Addo to work to ensure the perpetrators are brought to book.