NDC want to use ‘patapaa’ to get parliamentary majority, but it won’t work – EC acclaimed winner 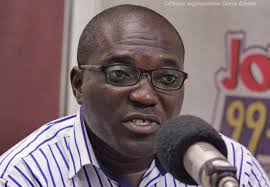 NPP MP-elect for the Techiman South Constituency has said the National Democratic Congress (NDC) is trying to forcefully claim victory of the parliamentary seat there.

Martin Adjei Mensah Korsah maintains that he won the seat and alleged that someone keeps changing the figures of the results to favour the NDC.

“Certainly something doesn’t add up and somebody is being dishonest, I won this election, duly declared and there is every legitimacy about wanting to use ‘patapaa’ [thuggery] to get a parliamentary majority, it won’t work.”

JoyNews/AdomNews · NDC want to use ‘patapaa’ to get parliamentary majority, but it won’t work – EC acclaimed winner

The comment follows the NDC’s constant claim that they won the constituency seat but the EC rigged in favour of the NPP.

The NDC on Tuesday presented pink sheets from each polling station in the constituency as a basis for its insistence that it won the seat and accused the government of working to deny the NDC a parliamentary majority.

Minority leader Haruna Iddrisu, insist there was no collation of results at the constituency.

“We know and we demand that this be done before 7th January, then the British High Commission, the EU, UN, the US Embassy, ECOWAS and the African Union should be…because our democracy means a lot to them just as it means to us and this fatal process to our democratic journey can undermine our collective quest for a peaceful, stable, democratic Ghana.”

But the NPP MP-elect for the area said the results as presented by the NDC were inaccurate.

“In a matter of two weeks, the figures have changed per the NDC sheet about five or six times, it tells you something fishy is happening.”