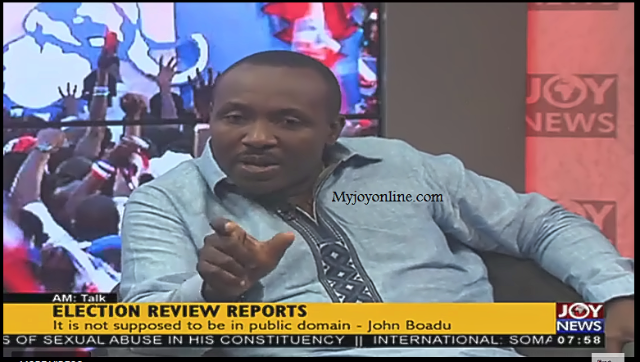 The acting NPP General Secretary John Boadu says the party has completed its audit of the 2016 electoral victory and would use its findings to improve its gains come 2020 general elections.

He said the 2016 victory must not relegate challenges and problems its election machinery faced in the run-up to the December 2016 polls.

Mr Boadu said the party is not satisfied with having 169 seats in Parliament. It fell short of commanding a super-majority by 14 seats.

'Winning 250 out of 275 seats is not bad', the politician said on Asempa FM's Eko Si Sen Wednesday but reckoned the party could still do better.

John Boadu, an accountant by profession, said the NPP also wants to reach the political heights of the African National Congress in South Africa where its stranglehold on power is near total and incontestable.

The ANC which has been in power for more than 22 years has consistently won at least by 60% of the popular vote since Nelson Mandela won power in 1994.

John Boadu who is now seeking to be elected as the part's substantive General Secretary said the party is taking steps to organise its election machine even before Ghana enters the 2020 political season.

He said the party has been slowed down by political crisis at the Electoral Commission. This is because, after every election, the EC is supposed to organise meetings with political parties to review the management of the previous elections.

Laws and regulations would have to be re-examined ad tweaked if necessary while administrative procedures must be reviewed to check the 2016 lapses.

He took over as acting General Secretary when the substantive General Secretary Kwabena Agyepong was suspended indefinitely together with the then Chairman Paul Afoko and the Second Vice Chair of the party Sammy Crabbe.

NPP General Secretary John Boadu says constituency executives will no longer be in charge of organising the forthcoming constituency elections.

He says a special elections management team will be set up to take over the election to forestall any unfair tactics.

He said the party has learnt from past experiences where constituency executives often abuse their positions to favour their re-election bid.

In some cases, the constituency executives claim nomination forms needed by aspirants suddenly sold out.

He said in the upcoming elections, the party will form a team composed of national officers, regional officers, and important stakeholders to supervise the polls.

He said in the elections, no person can buy more than one form which is also to ensure the process is not hijacked by persons seeking to prevent their opponents from contesting.