NSMQ 2021: Presec, St Peter’s and 7 other schools face off to determine three finalists 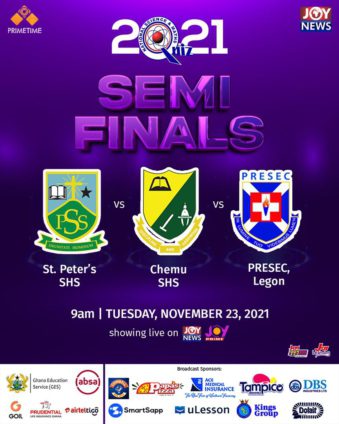 The 2021 National Science and Maths Quiz (NSMQ) produced by Primetime Limited and sponsored by the Ghana Education Service (GES) is gradually coming to a successful end.

But before Ghana witnesses one of its most exhilarating and fiercest grand finale come Friday, November 26, nine schools will have to battle it out today, Tuesday at the semi-final stage.

The quest for glory and an enviable trophy will see six-time champions, Presec-Legon, defend its current title against underdog Chemu SHS and formidable St Peter’s SHS.

After eliminating St Augustine’s College from the race, Chemu SHS has been pegged to deliver another unexpected blow.

However, such dreams may be dashed since the defending Odadie boys and three-time champions St Peter’s throughout the contest have exhibited intense dominance.

Since Presec-Legon started defending its title, it has not ended a contest with less than 70 points. It has made the highest score so far. This is a contest for the survival of the fittest.

The second contest for the day will have Keta SHS, Wesley Girls’ High School and Tamale SHS throw in their very best to prove their worth.

These schools are making their appearance at the semi-final stage after a remarkable showdown at the one-fourth stage.

Armed to the teeth, they will rock shoulders, surmount each other’s forts in all five rounds just to avoid the “better luck next time” comment from Quiz Mistress Professor Elsie Effah Kaufmann. At this stage, “Congratulations, you have qualified for the final” is all these contenders seek to hear.

The last but certainly not the least contest to give Ghanaians the certainty of which schools they can rest their hope in as well as their fervent prayers will feature KNUST SHS, and Prempeh College who is hopeful of taking a fourth trophy and Opoku Ware School.

Opoku Ware School has already chalked two wins and hopes to make a third but for KNUST SHS, this is their one-time opportunity to hoist their flag so high with honour, hence the final contest will be a clash of the titans.

The broadcast of the much-anticipated contests will be brought to you by JoyNews and supporting partners.