Nurse sacked after placing bets on when patient would die 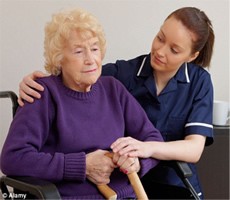 Three Swedish care home workers who placed bets on when a sick patient would die are facing a police investigation.

The employees were all sacked after a colleague blew the whistle on the scandal.

When the ill person did pass away they mocked them by putting sunglasses on the corpse, Swedish paper The Local reported.

The workers were reported by a temporary member of staff at the nursing home run by Attendo Care in Vaxjo, southern Sweden.

A spokesman for the company said that the three employees admitted responsibility straight away.

The whistleblower who was present when the patient died also contacted police after the death.

A spokesman for the company said: ‘Yes, they admitted it, but there were varying degrees of how seriously they perceived it to be.’

The workers – two temporary employees and one full-time member of staff – were all sacked straight away and a police investigation is now being carried out.

A patient in Lidingo, near Stockholm, went a fortnight before they had bandages changed while a cancer sufferer was left in their own drying faeces.