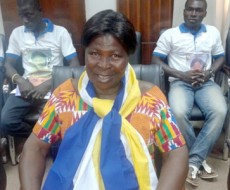 The atmosphere in the studios of Hitz FM was a hilarious one as presidential aspirant Akua Donkor was hosted on the Cruise Control show last Friday.

The aspirant who will be contesting under the ticket of the Ghana Freedom Party (GFP) disclosed some key aspects of her manifesto which she said contains massive plans and projects for Ghanaians should she win.

Madam Akua Donkor told Mercury Quaye, host of the show, that her government will give free vehicles for all journalists should she win the upcoming general elections.

This, according to her, was borne out of the belief that journalists have a vital role to play towards national development hence need a form of support.

The GFP flagbearer added that she will provide each and every media house as a body with separate vehicles.

She, however, pointed out that the only institution that will pay for the vehicles she will supply is the Ghana Police Service because they do not need them as much as other governmental institutions.

Akua Donkor revealed she was disappointed in the President Akufo-Addo for spending a lot of state resources on 300 MMT buses when she believes journalists need vehicles most.

The GFP flagbearer also promised to drop the cedi as a national currency and make the British pound Ghana’s currency.

According to her, the inception of the Ghanaian Cedi dropped Ghana’s international commercial value, arguing that bringing in the pounds will help match up the Ghanaian economy to that of Britain.

Adding more promises Akua Donkor said that her party will give devoted farmers money to invest in their farming activities.