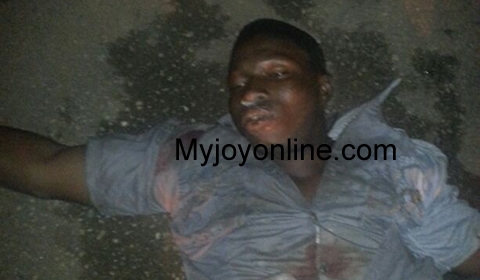 The Police in Obuasi shot and killed a suspected armed robber and wounded two others during a shootout Thursday night.

The robbers, four in number, attacked a gold dealer at his residence at Asonkore, a surburb of Obuasi. The victim made distress call to the police who quickly moved to the scene of the robbery attack.

The police say when the robbers saw the police officers they opened fire while trying to escape.

This forced the police to return fire resulting in the death of one of the suspects.

He said his men "retrieved two locally made pistols, three empty shells, four live cartridges, a knife, a two-edged sword and some talisman" from the robbery scene.

No casualty was recorded on the side of the police, according to the Crime Officer. The gold dealer and his family who were unhurt in the incident, are also said to be doing well.