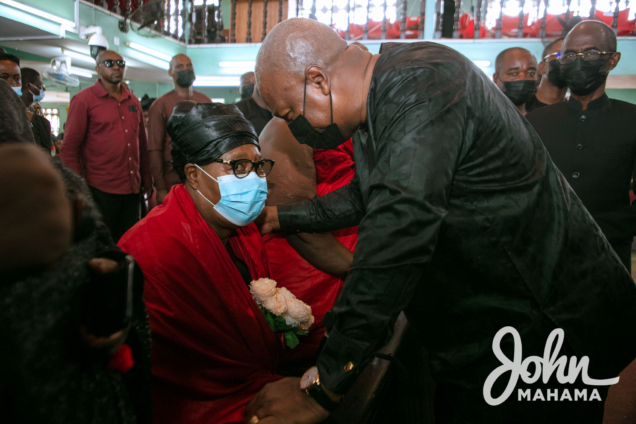 Former President John Mahama joined the family and friends of AB Crenstil for the one-week commemorative service held in honour of the late singer.

The event was held on Saturday, August 13, 2022 at Bethel Methodist Church in Tema Community 8.

Taking to social media, John Mahama noted that “It was a solemn remembrance service for a very talented and creative songwriter who for decades entertained and educated us with his music.”

He added “may his soul rest in peace, as we console his large family, which includes friends, patrons and entertainment industry players.”

AB Crentsil died on July 13, 2022, at the Bank Hospital, Accra. The musician had been ill for a while prior to his death. AB Crenstil died at the age of 79.

He left behind his beloved wife Elizabeth and eight children.

Meanwhile, AB Crentsil will be buried on November 5, 2022, in Ewoyaa, near Saltpond in the Central Region.

This was made known at the one-week memorial service to commemorate his passing.

A family member, Joseph Kofi Quainoo who announced the funeral and burial plans said a wake keeping and thanksgiving service will be held on November 4 and 6 respectively.