Police is on top of affairs - ACP Kwesi Ofori on surge in crime - MyJoyOnline.com 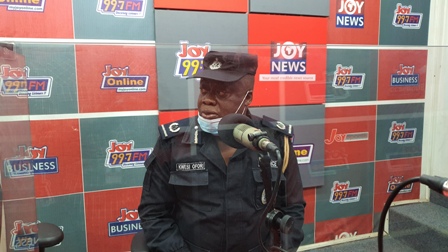 Head of Public Affairs of the Ghana Police Service, ACP Kwesi Ofori says the service is in control of the recent criminal activities that seek to endanger the lives of Ghanaians.

According to him, the police acknowledges the surge in such cases as it has received reports of crimes particularly in the Bono East and Eastern Regions as well as the northern corridor.

Speaking on PM Express on Wednesday, ACP Kwesi Ofori noted that after receiving such reports the police, led by Acting Inspector-General of Police, Dr George Akuffo-Dampare are working tirelessly to resolve such matters.

“Following developments of robbery in Bono East, some parts of the Eastern Region and the northern corridor, the acting Inspector General of Police, GUTA put up a plan in place to arrest the people.

“As a result, the special anti-robbery squad were put up in all the aforementioned areas and directors from the police headquarters to partner with the various police commands so that we can succeed in getting rid of the armed robbers on the highways. Lo and behold, they are there working very hard and controlling those routes.

“There is some menace that has taken place in the Volta Region. Quickly, the police stepped in with all the technical support and other service providers from the administration to ensure that we get to the bottom of the matter. The Inspector-General of Police personally visited the place to reinforce our message by meeting the Chiefs, families of the children.” he told Evans Mensah, the host.

ACP Kwesi Ofori, therefore, gave the assurance that “the police are on top of affairs. It is a new administration that has come and they are strategising seriously to arrest the situation.”

“As I speak to you, we are increasing our numbers in those areas to augment the strength of the various regional commands. So the police is not sleeping at all. Management is at work and we are doing everything possible as a law enforcement agency to get to the bottom of these matters,” he added.

It can be recalled that a journalist with Muslim TV (MTA International), Taalay Ahmed was murdered during a robbery attack on a vehicle he was travelling in on the Tamale-Buipe road.

Speaking on the matter, the Head of Public Affairs of the Ghana Police Service disclosed to JoyNews that the police after a shootout managed to apprehend four culprits and killed two others.

“There came the international journalist who was murdered in and around Kintampo, Tamale and Buipe. Immediately, the task force moved in, through intelligence-led operation, we chanced upon them and they visited armed violence on the police and the police responded. Two were killed and four were arrested. As I speak to you, they are also assisting investigations,” he said.

Again, he revealed that in the Bono East Region alone, notorious armed robbers numbering about 14 to 20 have been arrested and are under investigation.

Meanwhile, ACP Kwesi Ofori is calling for deeper collaborations between the police and members of the public to drastically reduce the number of crimes happening in the country and also arrest perpetrators.

“Another cardinal area is public engagement. The police leadership is engaging the civil populace to promote crime reporting to assist in providing fruitful information that might lead to the arrest of some of these criminals and even locate stolen items.

“My belief is that the police should be seen as an ally in the fight against these crimes. We will do everything possible to be in control with assistance from the public. We all know crime-fighting is a shared responsibility between the police and the civil populace.

“People are assisting in one way or the other but this time around we want an all-out support,” he stated.

He concluded by commending JoyNews for its role in ensuring the menace is nipped in the bud.

“We are very happy you have given us your platform not only today but many times to use it to get support from the civil populace.”