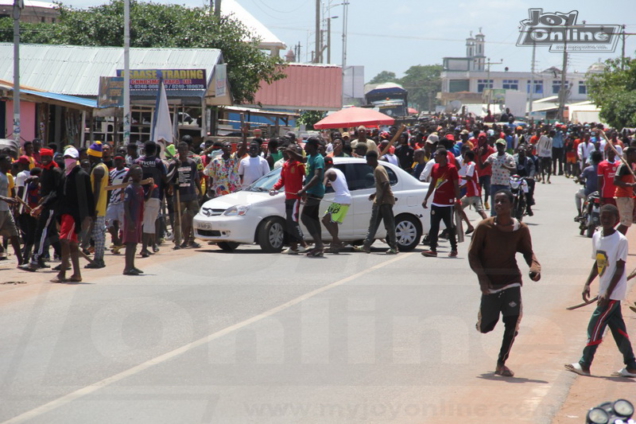 Member of Parliament for Ejura Sekyeredumase, Braimah Mohammed has described as false the claims by the police that the youth of the area attacked the security agencies during their protest to demand justice for dead activist Kaaka Mohammed.

According to him, the police statement is an afterthought and an attempt by the security agencies to cover up the fact that they acted unprofessionally when they opened fire on the youth leading to the death of two people and four others sustaining injuries.

Speaking to JoyNews‘ Joseph Opoku Gakpo, Mr Mohammed stated that the information he gathered showed the security agencies rather fired directly at the youth, who he says did not harm nor attack anyone while protesting.

“This is falsehood, a complete falsehood. You [police] have been trained to control the crowd, so I don’t believe them. I have a picture here of a soldier firing into the crowd. If you are going to fire to disperse the crowd you will fire into the air.

“Look at the soldier, look at his position, he just squatted, and aimed into the crowd and fired, not only one bullet, he fired several rounds of ammunition. That is how come about four people are lying in the hospital right now, that acted unprofessionally,” he added.

The youth had hit the streets of Ejura to demand justice and accountability for the death of their colleague, social activist, Ibrahim Mohammed also known as Kaaka by two unknown assailants.

In the statement, the police said that their preliminary investigations reveal the youth blocked the main Ejura Atebubu road impeding traffic.

“The Police moved in with military reinforcement to quell the situation but the irate youth charged the security officers with all manner of implements including firearms, clubs, machetes and stones.”

“The security officials fired shots to disperse the angry mob who failed to retreat but rather massed up at all corners. The death and injuries were recorded in the process,” part of its press statement read.

However, the Ejura Sekyeredumasi MP said that if the youth had blocked the road, shooting at them was not the best option available to police and military personnel that have been trained on how to deal with crowds.

“What are the water cannons, that we use our taskayers money to buy, doing? What are they doing?” he quizzed.

Mr Braimah called out the police to admit their actions were unprofessional and resolve to do better next time.

DISCLAIMER: The Views, Comments, Opinions, Contributions and Statements made by Readers and Contributors on this platform do not necessarily represent the views or policy of Multimedia Group Limited.
Tags:
Ashanti Regional Police Command
Braimah Mohammed
Ejura Sekyeredumasi