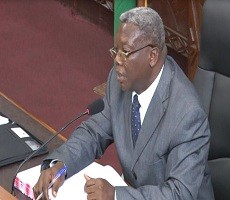 The sole commissioner appointed to investigate the phenomenon of judgement debt has chided politicians for talking too much, even when they are uninformed about the issue they are called to comment on.

"If you are not conversant with the issue, why do you talk?" Justice Yaw Apau questioned when former Energy Minister and chairman of the Parliament's Accounts Committee appeared before the judgement debt commission to assist in investigating the circumstances surrounding the sale of a drill ship owned by the Ghana National Petroleum Corporation.

According to him, when politicians get out of bed in the morning, the first thing they are bombarded with are questions from the media and somehow they offer answers, even when they have little idea what the issues are about.

"Politicians talk too much when they go on air," he stated, adding "If you talk and you slip, the slip becomes a jingle for the journalist," Justice Apau stated.

He also commented on the distribution of some Chinese security phones distributed to MPs as part of a deal to approve an agreement which was before the House.

He said he listened to an interview on radio in which two MPs were commenting on the Chinese phones saga; one appeared to be speaking on a position of ignorance on what the issue actually was whilst the other tried to explain the circumstances under which the security phones were distributed.

He said given his understanding of the issues, there was nothing wrong with the distribution of the security phones to MPs, ministers and other security officials but the MP who was speaking on the position of ignorance did little to help the situation and gave ammunition to the journalist or the interviewer to accuse the MPs of collecting bribes.

Justice Apau said although the informed MP was giving convincing answers, the interviewer appeared to have taken a position and maintained that the MPs did something wrong.

He advised politicians to be circumspect in the comments they make, especially on radio.