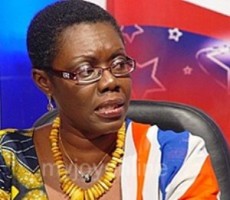 Who says what? We, the youth of the Progressive People’s Party will not sit by inertly and allow Ms. Ursula Owusu’s thoughtless description of our proficient running-mate to Dr. Papa Kwesi Nduom, Madam Eva Lokko and the unfair comment about our party to go unattended to.

How can Madam Ursula Owusu assert that Madam Eva Lokko’s affiliation to the Progressive People’s Party (PPP) was a wrong choice and that, the party will not make any positive impact on her political ambition, when she could have done better by telling Ghanaians why she is still canvassing support for a wrong Presidential candidate and continue to proclaim membership of a mediocre party like the New Patriotic Party – NPP.

Talking of wrong choices, we believe that Madam Ursula Owusu has made a number of wrong choices already in her life and she does not have the moral right to judge the choices of others especially those who have demonstrated competence, incorruptibility and have risen to a high position in public service as Director-General of Ghana Broadcasting Corporation.

We submit that the least Madam Owusu could do as a former advocate of women empowerment is to support Madam Eva Lokko to succeed to be able to offer competent leadership that can transform this country.

Again, she opines that the PPP ticket Madam Eva Lokko is standing on, does not have a realistic chance of winning elections. Why? Is she God to be able to determine what the future holds for anyone or Ghana? When did she all of a sudden transmogrify into a mystical element to be able to go into the minds of Ghanaians to predict which party they are going to vote for in the December elections? Wonders shall never end? For her information, Ghanaians are discerning enough to know what is good for them. Many Ghanaians have now come to the realization that both NPP/NDC have nothing good to offer Ghanaians. This display of arrogance and taking Ghanaian voters for granted by the NPP and the NDC as though we do not have a choice in this country is nauseating.

People like Ms. Ursula Owusu always talk like this because they don’t respect the Ghanaian electorate, thinking Ghanaians are such dogmatic to change to be able to vote for a candidate with credibility and a demonstrable record to take Ghana to the promise land of success. Ghanaians now understand the fact that they are no longer going to WASTE THEIR VOTE ON THOSE WHO HAVE DISAPPOINTED THEM OVER A GENERATION! Ghana deserves better.

Ghanaians are now awake and want a better alternative to the rather alarming NDC/NPP cacophony, thus the PPP. So Madam Ursula Owusu of NPP shouldn’t be surprised if come January 7, 2013, Dr. Papa Kwesi Nduom is sworn in as the President with Eva Lokko as the Vice President.

For us in the PPP, we have confidence in the competence of Madam Eva Lokko and we believe for now, she is the right person to be the running mate of Dr. Papa Kwesi Nduom. Considering her background and aptitude, it would be fair to say that she is in the best party and better than some of the Presidential Candidates and their running mates.

We wish to remind Ms. Ursula Owusu and the NPP of the challenge thrown by the PPP on competence and incorruptible leadership to publicly declare their assets and support the election of District Chief Executives rather than making unproductive comments about our progressive running mate.