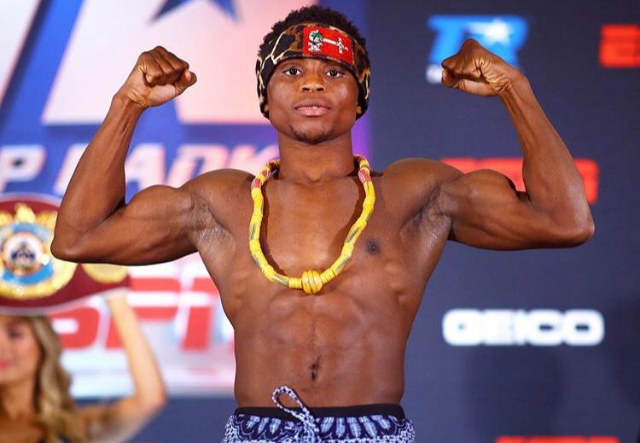 Tucson Arizona, USA – He walked into the main events hall of the Tucson City Center Hotel spotting a headband of his church in Ghana (ARS), sunglasses and a white t-shirt with his signature chant ‘neho’ inscribed.

With subtle fanfare and led by his father and accompanied by almost 10 fans wearing customized t-shirts, Dogboe confidently entered the hall and took a seat for the official weigh in. Of course, he looked very trimmed – a result of the months of taking pain in the gym and elsewhere to ready for tonight’s battle of destiny.

Remember, Isaac Dogboe (20-1- 14kos) v Emmanuel Navarette (26-1, 22kos)  is not the main event of this top rank fight night to be staged at the Tucson Convention Center, the WBC Super featherweight title fight between Miguel Berchelt and Francisco Vargas is. But for a moment one would have mistaken Dogboe’s co-main feature as the top feature because of his charisma and the buzz created by his immediate team at the weigh-in. His trademark chant ‘neho’ echoed across the hall which had almost 100 journalists and fans.

The Ghanaian goes into this bout with informed confidence – knowing how dangerous his opponent is and being better prepared to face him in the second instalment.

Following the big surprise at the Madison Square Garden Dogboe dropped from being the favourite to underdog on the graphs of the bookmakers. most of the predictions favour the unassuming Navarette for obvious reasons. Navarette’s reach advantage of eight inches and height advantage of five inches, as well as his punch combinations, are seen as great assets going into this rematch.

“We will apply a lot of pressure and throw a lot of firepower at him. we learnt our lessons during the first bout and we will make sure we close in anD attack. we will knock Navarette out by the fifth round,” Paul Dogboe, Isaac’s father and trainer said.

Most of Dogboe’s opponents in his professional career have had a reach advantage but his combinations of hooks and jabs especially from his right, to the body have proved a great weapon.  Caesar Juarez was a victim of that attack style and crumbled via knockout in Accra Ghana at the Bukom Boxing Arena. This could work for Dogboe if he goes into Navarette’s body and sustains the pressure throughout the rounds. Going in search of a KO from the sound of the bell may not be the best as it could derail the Ghanaian royal’s focus. of course, applying pressure comes with its conditioning demands which are supposed to have been catered for by his intensive training camp in the Ghanaian coastal town of Keta. However, if Navarette combines a rock solid defence with swift counter punching, it will prove the tough fight that has been generally predicted. The Mexican must surely watch out for Dogboe’s stinging right and his combinations. They prove a dangerous arsenal if all is going right to the 2012 Olympian.

“I will use my brain a lot during this fight and he will have him come to me. I do not need to chase him,” Navarette told Joy Sports in a chat yesterday. Clearly, the lanky Mexican is aware of his worth and knows if he stays safe and clean from everything Dogboe throws at him he can comfortably walk out of the Convention Center with his WBO Super bantamweight belt intact. The truth is if he is defensive and fights outside, keeping Dogboe at bay, he could get it right a second time. Navarette’s introvert self that could be deceptive as he has always approached fights this way. In the past week, for instance, Navarette has done the treadmill at least one hour for three nights continuous. Some may see this as a risk especially to the stability of his legs. But Navarette on the treadmill just signifies the fighting spirit of the Mexican, especially in the sport. Twenty-four-year-old Navarette also has a swift left which normally lands on the blind side of his opponents. after weighing in at 121.6 lbs he is likely to step into the ring at weights between 130 lbs and 140

kg which could prove problematic for any opponent (especially smaller and lighter).

Hand and shoulder injury to Navarette?

Joy Sports has picked up that the rather reserved Mexican almost pulled out of this bout due to a training injury to his hand and shoulder. it is not certain if its a ripple from the hand injury he suffered in the first fight against Dogboe. While it’s unfortunate if true, it could pay to the advantage of Dogboe who badly wants to correct the wrongs from December 8. However, these situations are not new to the sport and may not necessarily have an effect.

The former champion has been very quiet all week. A lot of deep sleep, watching the Disney (cartoon) channel and checking his weight periodically before eventually weighing in at 121.4 lbs He got chatty after the successful weigh in and is in high spirits ahead of tonight’s bout. The 24-year old Ghanaian is surrounded by close family and friends who have crossed the miles from various locations in North and South America and Africa. Dogboe has been very peaceful and is convinced about this second bout.

The Mexican has been his usual calm self and reserved. A day before the weight in he walked into the hotel lobby and met Dogboe with a broad smile similar to that during their face off and a stretched hand ready for a handshake. Dogboe, as he has done with everyone, especially during this final week, responded with a friendly clenched fist and a straight look.

The Mexican entered the busy hall without any fanfare in the company of his immediate team. His reserved nature is a subject for conversation amongst the promotional team who sometimes need a big bubbly attitude in addition to the rings exploits to fully maximize and commercialize a boxers brand.

The mayor of Tucson, Jonathan Rothschild, attended the weigh in and asked to be taught how to chant the trademark ‘NEHO’ ( Never Failing Excellence through Hope we shall Overcome). It’s a word from his native Ewe tribe’s language which means to uproot something. not only the mayor but many who believe in Dogboe’s craft. Of course, the local population in Tucson is at least 31% Mexican, meaning Navarette could automatically have good support. However, the warmth extended to Dogboe by locals and his relative likability could draw him some good support tonight.

“Even in my worst state, Navarette couldn’t knock me out. I can’t wait for May 11 to rewrite the script. Navarette is going down. Watch out for the Royal Storm” – Isaac Dogboe

“I had a good fight the first time and Dogboe is a good fighter. I kept my focus and won the first fight. I will use my head this time around.” – Emmanuel Navarette

“Mexican boxers come looking weaker and not ready but will pop up big performances. However, I see a better prepared Dogboe compared to the last fight and I see him recording a knockout.” Mike Altamura, Match Maker.