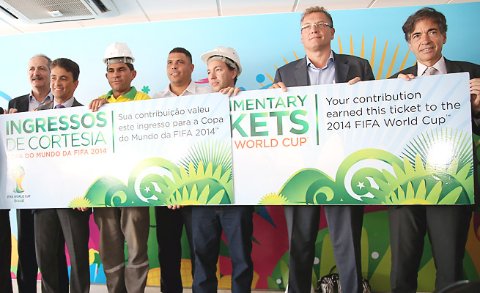 A group of about 50 protesters vandalized part of the construction site of a World Cup stadium and chanted anti-FIFA slogans during an inspection by organizers in Cuiaba on Tuesday.

FIFA Secretary General Jerome Valcke and other officials were met by jeering protesters when they arrived at the construction site of the Arena Pantanal.

The demonstrators, who were complaining about the cost of next year's World Cup and demanding improvements for local citizens, entered the venue and painted messages that called for "Less World Cup, more health and education.''

The protesters, mostly local teachers, carried banners reading "FIFA go home'' and chanted slogans from the field while FIFA and government officials continued their inspection tour from the stands.

Brazil Sports Minister Aldo Rebelo and former national team stars Ronaldo and Bebeto were among those who witnessed the protest.

The incident came a day after violent demonstrations in some of Brazil's largest cities, including one by teachers seeking better pay in Rio de Janeiro. The Confederations Cup in June was marked by protests and more are expected during the World Cup.

Because of the demonstrators, Valcke made a symbolic handover of tickets to workers at a different part of the site.

In the southern city of Curitiba, a Brazilian labor judge on Tuesday reversed a ruling that had halted construction at the Arena da Baixada for nearly a week because of workers' safety concerns. Work resumed, but a new inspection was scheduled for the end of the week.

The Arena da Baixada was less than 80 percent completed by the end of August, the lowest rate among the venues under construction.