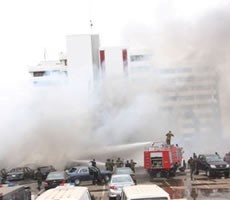 Three weeks after an explosion at the Central Mosque in Sapele, Delta State – and tellingly, two days after the bombing of St. Theresa’s Catholic Church, Madalla, Niger State which caused 36 deaths – another blast rocked Sapele Wednesday.

In Jos, Plateau State, reports of peace might have been grossly exaggerated as another attack led to three deaths on the night Muslim and Christian leaders claimed to have reached a rapprochement.

The Sapele incident, which occurred at about 9.30pm on Tuesday, left at least six children with various degrees of injury.

One adult was said to have also sustained some injuries but no death was reported.

A militant group from the Niger Delta claimed responsibility for the attack in an apparent reprisal for the deadly Christmas day bombings by Boko Haram.

Egbesu Mightier Fraternity said it was ready to retaliate by killing Muslims in Southern Nigeria, Press Trust of India said.

“The Boko Haram killing in the north will no longer be accepted and we are ready to equally kill any Muslim we see in southern Nigeria,” the group said in an emailed statement.

“We will not regret any soul that will go on the part of any Muslim in the South and any southerner that speaks evil against us will be violently visited by us because they too are in support of the killing of Southerners by Boko Haram,” the statement which came with no norm de guerre signatory said.

An improvised explosive device is thought to have caused the explosion, which left a little crater at the foot of a moveable kiosk popularly referred to in local parlance as “Caravan”.

Unidentified persons in a moving vehicle were suspected to have thrown the device into the compound near the kiosk and sped off.

The incident occurred at the Quranic School and Islamic Centre on Urhobo Road adjacent to King Street, less than 200 meters away from the central mosque where a blast was reported on December 10.

Sympathisers rushed the pupils to the nearby Sapele Central Hospital, but THISDAY gathered that three of the injured victims were later taken to the University of Benin Teaching Hospital (UBTH) for further medical attention.

About 30 children, some of them in their early teens, were said to have gathered for the Quran lesson session, called Makaranta, when the blast occurred.

The police confirmed the reports but said no arrests had been made.

The Delta State Police Command spokesman, Mr. Charles Muka, an assistant superintendent of police (ASP), who confirmed the development to THISDAY in Warri Wednesday, said that the injured children were being treated in an undisclosed hospital.

Preliminary investigation by the police revealed that the “locally made explosive device was thrown into a Quranic or lesson class and not a school as being rumoured”, Muka said.

THISDAY, however, learnt that the device was strong enough to have shaken some nearby building significantly.

Muka disclosed that the perpetrators of the act had not been apprehended “because of the nature and time of the incident” even as he said investigation into the occurrence had begun.

Police were collaborating with local vigilance groups in Sapele to unravel the mysterious blast, the police spokesman said.

Eyewitness accounts said residents in the area initially mistook the blast for some Yuletide fireworks, which had been a regular feature in the area of the town for several days now.

“We thought the loud noise was from Christmas fireworks until people started running and rushing some injured persons from the scene,” a resident told THISDAY.

However, operatives of the Joint Military Task Force (JTF) had by Wednesday morning cordoned off and prevented journalists and cameramen from going near the scene of the blast to take photographs or video footage.

The incident in Sapele is coming few days after members of the Boko Haram set off bombs on Christmas day at St Theresa’s Catholic Church, Madalla, Niger State.

Meanwhile, the peace talks between Christian and Muslim leaders in Plateau State may have yielded nothing as three members of the same family were hacked to death the same night at Wereng community of Riyom Local Government Council of the state.

This is even as the state government expressed sadness over the attack, while a member of the House of Representatives said that the military had failed in providing security for the state.

The community, which is sparsely populated lives in settlements with their roofs made of thatched grass.

Journalists were led to the place Wednesday by the Special Adviser to the Governor on Media and Publicity, Hon. Pam Ayuba.

Mother of a victim, in an emotion-laden voice, said the attack started at 11pm when she heard gunshots and had to escape through the window to run to the nearest community there.

“I began to raise an alarm and because of the alarm, many people were awakened and the attackers could not do more harm but to run away. And the people thereafter mobilised and saw that three people were already gunned down. That is all I could recollect,” she said.

Mr. Francis Pam, a victim’s father, said he had not returned home when the incident occurred. The deceased, according to him, are his son, daughter-in-law and granddaughter.

He said he was coming towards home when he heard a staccato of gunshots and he made a u-turn, adding that he too alarmed the community members and rushed to the place.

He emphatically said that the attackers were Fulani herdsmen, but added, however, that he did not know which route they followed as there is no electricity in the community.

On how he knew that the attackers were Fulani, Pam said that there had been similar attacks before by the same people who came to attack only without stealing anything.

“They attack and kill only without taking anything even money. Definitely they are the same people,” he said.
Ayuba said that government was touched.

“The man is Philip, about 38 years old… his wife is Simi, about 28 years and then the little child. It is unheard of that a family would be singled out for massacre in a pre-planned attack. You know as a government, we have faith with the security of the people. Yet we are very much aware that there are sustained efforts by some people who do not want the state to return to the path of peace by attacking the state at will and they are bent on causing crises day-in-day out,” he said.