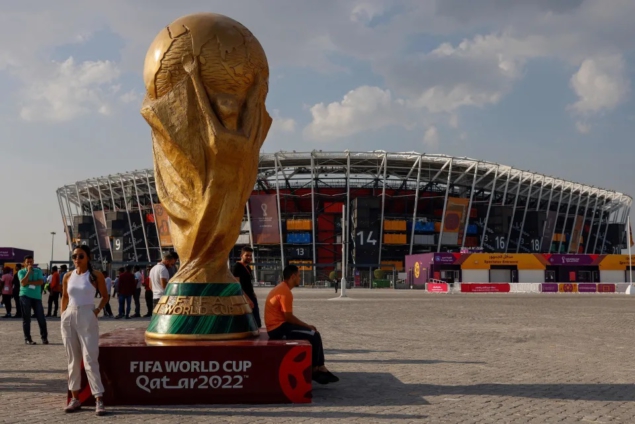 A U-turn just days before the World Cup in Qatar means fans won't be able to drink beer in the stadiums. (Getty)

Football fans who have shelled out for expensive hospitality suites at the Qatar World Cup will not be affected by the last-minute stadium beer ban.

It comes after the sale of alcohol at stadiums in the country was banned just two days before the tournament.

Initially, fans were due to be able to buy Budweiser – a sponsor of the tournament – within each of the eight World Cup stadiums, but a last-minute U-turn means alcohol can no longer be consumed within stadium perimeters.

Supporters will still be able to consume alcohol in designated fan zones.

However, it has emerged that the only people exempt from the stadium alcohol ban will be those in pricey corporate hospitality.

MATCH Hospitality, the worldwide provider of the FIFA World Cup 2022 official hospitality programme, confirmed that its hospitality suites will not be affected by the ban.

In a statement, it said: “Please note that those in corporate areas of the stadiums, which include official hospitality spaces, will be served alcohol as per the product inclusions of the product purchased.”

More than 240,000 hospitality packages have reportedly been sold, ranging in luxury and price. One suite, which can accommodate 44 people, sold for £2.1 million, according to Metro.

Perks of corporate hospitality packages can include glass-fronted boxes, access to stadium seats, as well as a dedicated concierge, live chef stations and multi-course menus.

MATCH Hospitality also offers ‘MATCH House’, a venue which allows people to watch live-streamed matches for specific games without having a suite, and include beer and wine.

Packages for the venue, which is at the FIFA Fan Festival site, can be booked by game and range from $450 per person to $1,145.

The alcohol ban in stadiums is believed to have come after pressure from Qatar’s rulers, including the Gulf state’s Emir, and reportedly led to crisis talks between FIFA and Budweiser’s beer’s brewer, AB In-Bev.

The last-minute U-turn sparked anger from the Football Supporters’ Association, who accused organisers of a “total lack of communication”.

“Some fans like a beer at a game and some don’t, but the real issue is the last minute U-turn which speaks to a wider problem – the total lack of communication and clarity from the organising committee towards supporters,” a spokesperson said.

“If they can change their minds on this at a moment’s notice, with no explanation, supporters will have understandable concerns about whether they will fulfil other promises relating to accommodation, transport or cultural issues.”

In a statement FIFA said: “Following discussions between host country authorities and FIFA, a decision has been made to focus the sale of alcoholic beverages on the FIFA Fan Festival, other fan destinations and licensed venues, removing sales points of beer from Qatar’s FIFA World Cup 2022 stadium perimeters.

“There is no impact to the sale of Bud Zero which will remain available at all Qatar’s World Cup stadiums.

“Host country authorities and FIFA will continue to ensure that the stadiums and surrounding areas provide an enjoyable, respectful and pleasant experience for all fans.”

Speaking shortly after the news broke, England goalkeeper Aaron Ramsdale said he thought travelling fans would find a way of enjoying themselves despite the ban.

He said: “I think the fans will find some way of having a beer, I don’t think you need to do it so much at the game.

“Hopefully, with them not being able to drink we can perform on the pitch to give them that excitement and buzz. But we also have to respect the rules and continue to work, we will put pressure on ourselves to entertain from the football pitch.”

DISCLAIMER: The Views, Comments, Opinions, Contributions and Statements made by Readers and Contributors on this platform do not necessarily represent the views or policy of Multimedia Group Limited.
Tags:
Beer ban
Qatar 2022 World Cup