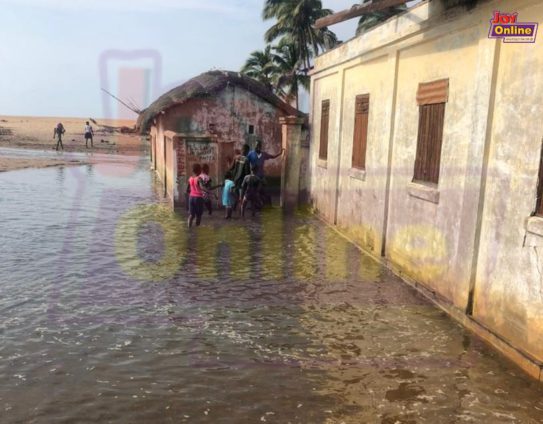 Residents of Dzita, Agbledomi, Atiteti, Agokedzi, and Fuveme in the Anloga district of the Volta Region have been displaced by fierce tidal waves that swept through the communities at the wee hours of Sunday.

Properties running into thousands of Ghana cedis have been destroyed by the phenomenon.

Residents who have been speaking with JoyNews lamented the number of years they have had to endure the destruction of the tidal waves and how it has affected their livelihoods.

They recounted the numerous appeal they have made to successive governments about their perennial predicament; however, little has been done to resolve the situation.

But they say they will not give up yet.

Residents of the affected communities have charged government to commence the sea defence wall project as a matter of urgency.

According to them, this will bring a lasting solution to the frequent destruction they have endured in recent years.

“The tidal waves invade our homes unexpectedly. Although we have moved far off from the sea, it still keeps coming.

“We have been asking for help for years, but nothing seems to be happening soon; we need urgent attention, especially the construction of the sea defence wall project,” a resident said.

The residents, primarily fisherfolks and farmers, say it will be difficult for them to find other jobs if they are permanently relocated.

But for the interim, they are willing to relocate for the sea defence to be constructed temporarily.

Member of Parliament (MP) for Anlo Constituency Richard Kwame Sefe, who was in the company of the Anloga DCE, Seth Yormewu, visited the area to see the extent of damage in the latest situation.

“Government should do everything possible to protect the coastline because failure to that, the worse may happen in four or five years to come,” Mr Sefe said.

On his part, DCE for Anloga, Seth Yormewu, described the situation as terrible and worrying.

He subsequently called on organisations, individuals, and the central government to come to the aid of the people.

He said the Anloga District Assembly is financial constraints, thus, hoped the government will attend to the affected residents momentarily.

“We know it’s not easy, and the government is trying, but we are just appealing for urgent attention for our people who are displaced,” Mr Yormewu said.

The devastating nature of the tidal waves has been great worrying to the residents of Keta, Anloga and Ketu  South for several years now.

Agokedzi, once a haven for affected residents of Fuveme and Kpokpogbor, has also been affected.

Experts said in 2011 that if the sea continues to rise between two and six metres annually, about 2,000 residents in the Keta Municipality will be displaced entirely.

DISCLAIMER: The Views, Comments, Opinions, Contributions and Statements made by Readers and Contributors on this platform do not necessarily represent the views or policy of Multimedia Group Limited.
Tags:
Anloga District
Properties destroyed
Residents displaced
Tidal waves