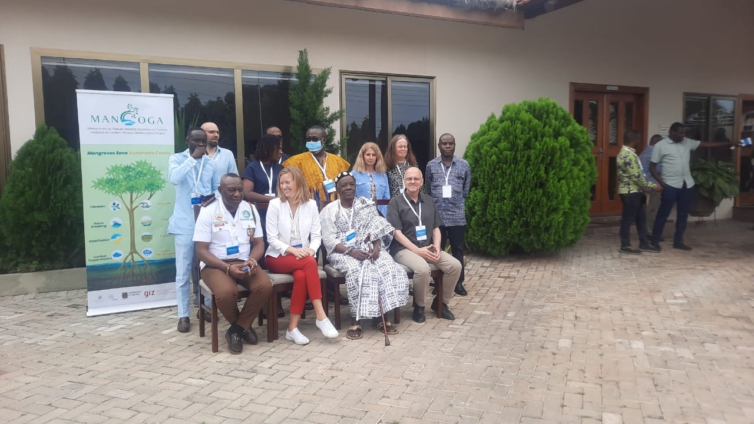 The Department of Marine and Fisheries Sciences together with the Institute of Environment and Sanitation Studies (IESS) both of the University of Ghana and the Helmholtz-Zentrum Hereon Research Institute in Germany have organized a workshop for stakeholders and the media on mangroves as a nature-based solution to coastal hazards in eastern Ghana (MANCOGA) project.

The first in a series of engagements with stakeholders, which was held in the Anloga district, was aimed at encouraging stakeholders to support the reinvigoration of mangrove ecosystems and their associated services along the eastern coast of Ghana.

The Head of Development of Marine and Fisheries Sciences at the University of Ghana, Professor Francis Nunoo, noted that the success of that will help to improve coastal protection, reduce the influx of pollutants into coastal waters, increase carbon sequestration and ultimately support the blue economy.

Undoubtedly, Prof Nunoo said, hazards such as erosion, flooding and pollution are among the toughest environmental challenges confronting our coastline with rippling effects on livelihoods and the economy, adding that, the  management of these issues continue to be hampered by multiple factors such as the lack of reliable data and information, insufficient communication among stakeholders and, nations have missed the pathways to reach informed decisions that guarantee sustained solutions and impacts.

“What the MANCOGA Project will do, therefore, is to use the history of erosion and flooding along the Ghanaian coast to develop a robust and participatory nature-based solution (NbS) that will rely on mangroves to address a variety of hazards such as climate change, flooding, coastal erosion and pollution while covering aspects of blue carbon, ocean acidification, decline in fish stocks and biodiversity loss with the ultimate aim of increasing community resilience and wealth creation” Prof Nunoo said.

Prof Nunoo noted that a key component of this project is the co-design phase which seeks to ensure broad and comprehensive involvement of stakeholders from all levels of society and administration from design of the project to implementation.

“Incorporating the perspectives of key stakeholders and practitioners, like your good selves, into the design and production of the research will make you a full part and give you ownership of the project and we do not want MANCOGA to end up like other projects where there is a wide gap and lack of effective engagement between societal needs, science and playmaking and implementation,” he said.

The Executive Director of the Environmental Protection Agency, Dr. Henry Kwabena Kokofu, noted that the 1992 constitution of Ghana affirms the need for sustainable development, specifically; Article 36(9) requires the state to take appropriate measures to protect and safeguard the national environment for future generations and seek collaboration with other state and non-state actors to protect the environment.

Dr Kokofu noted that, the EPA is working closely with the universities and research institutions to continually provide the quality workforce that are trained at the various institutions.

He noted that the agency since 1986 has been working in collaboration with its partners to develop an environmental sensitivity atlas for the country adding that the agency through its collaboration with the universities, state actors and development partners developed a GIS based environmental sensitive atlas covering the entire coastline of the country.

He said, mangroves comprise many shrub and tree species that tolerate hot, muddy and salty conditions and flourish along saltwater shorelines of many tropical and sub-tropical countries, though some mangroves have recently been found to also thrive in fresh water in the Amazon forest.

Dr Kokofu noted that mangrove conservation and restoration have potential ecological and economic benefits and are an essential component of natural coastal defence and protection systems in the world.

The Project Lead for MANCOGA, Dr Edem Mahu, stated that there are several challenges that confront the coastal environment i.e. erosion and flooding; and the east coast has been one of those areas that has been highly affected.

Dr. Mahu noted that over the years, the authorities have been trying to address some of these issues by mainly using infrastructure or hard engineering processes; however, she noted that it is also necessary to combine science or engineering with natural solutions which can greatly benefit the area and the people.

She said, the above natural solution in addition will also add value to the mangrove ecosystem and that MANCOGA is doing its best as an organization to address the issues in pollution, coastal erosion and flooding.

The MANCOGA Project is funded by the Meerwissen Initiative of the German Federal Government.

The Department of Marine and Fisheries Sciences, together with the Institute of Environment and Sanitation Studies (IESS), both from the University of Ghana are collaborating with the Helmholtz-Zentrum Hereon Research Institute in Germany to spearhead the project.

The co-design phase will continue between now and March 2023. We will use the period to engage actively with all stakeholders through workshops and visits to your various institutions as well as virtual interactions.