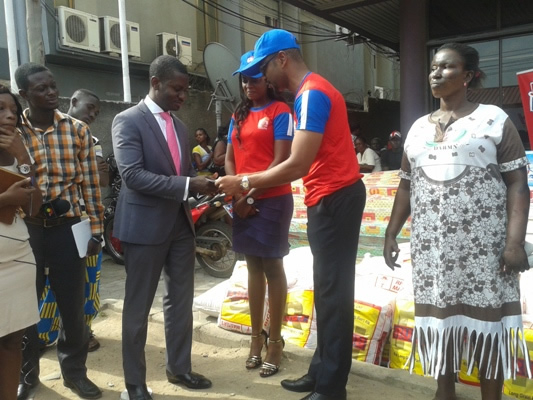 Sahara group, a leading privately owned Oil, Gas, Power and Infrastructure Conglomerate has provided aid and support to the victims of the June 3 flood and fire disaster in Accra, Ghana.

The support came in the form of medical supplies, bedding materials, soaps and detergents, food items as well as an undisclosed amount of money to help offset the medical bills of the injured and ameliorate their suffering.

Sahara currently has its operations in Africa, Europe, Asia, and Middle East and continues to explore new frontiers to replicate its passion for seeking creative, cleaner and sustainable ways of being the provider choice wherever energy is consumed.

Speaking on the donation, Tosin Etomi; Country Manager of Sahara Group in Ghana revealed that: “Sahara, as a key stakeholder in the Ghanaian economy, was touched by the plight of the victims of the disaster and moved to provide some measure of support for those affected.”

“Sahara shares the pain of every Ghanaian affected by this disaster and we pray for speedy recovery for those in the hospital. It is a privilege for Sahara to stand in solidarity with Ghana at this time,” he added.

According to him, Sahara hopes the cash donation, which forms part of the support, would defray some of the huge cost of treatment and rehabilitation of victims with varying degrees of injuries. Mr. Etomi further commiserated with the families of those who lost their lives in the disaster.

“We pray for the repose of the souls of the departed and also pray that the well being of the grieving families”, he stated.

The relief funds were handed to Joy FM, an Accra-based radio station and the National Disaster Management Organisation (NADMO), the body vested with the responsibility to manage disasters and emergencies.

In order to achieve maximum impact and for the items to reach the intended recipients, Sahara is partnering with Joy FM to spearhead the distribution of the items.

The station launched an emergency relief effort after the disaster and has since been coordinating the donation of items received from the public- spirited individuals and organizations to the victims.