Santasi residents demonstrate over poor nature of roads in the area - MyJoyOnline.com

Santasi residents demonstrate over poor nature of roads in the area 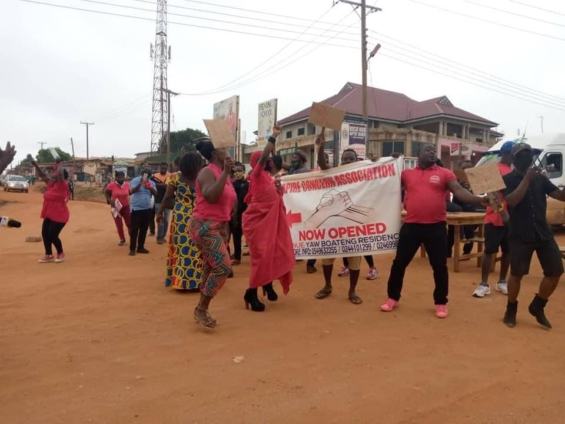 Residents of Santasi Apire in the Kumasi Metropolis are demonstrating against the lack of improvement on their road networks.

According to them, promises by government to fix the roads are yet to materialise.

The roads, as observed, have been rendered muddy and slippery due to rainfall in the area. Regular commuters explain that drivers have to skillfully maneuver their way through the mud.

The demonstrators, including taxi drivers, who held a banner with the inscriptions “Aspire Concern Association”, took to blocking the roads and shouting chants on early Tuesday morning to register their disappointment.

Some of them held placards with the words ‘No road no votes’, ‘Dust kills’ among others.

They say these concerns will influence their vote in the upcoming elections.

They also complain that the dust during sunny days is unimaginable.

Leader of the Landlords Association in the area, Christopher Saaniano reveals that the group has plans to embark on more demonstrations before the elections.

“We have planned series of activities before December. We will bring our mattresses next week if we don’t hear anything positive to sleep in the middle of the road. We will not stop now” he said.

Their actions were noted to affect traffic flow, as other residents had to either change routes or walk their way to work.

Some others who shared similar sentiment were seen to join in the activity.

Meanwhile, Assembly Member for Hemang Ampatia, James Sarfo says his attempts to get the road fixed have proved futile.

“I have been to all appropriate quarters to get this small portion alone done but no one will mind me” he said.