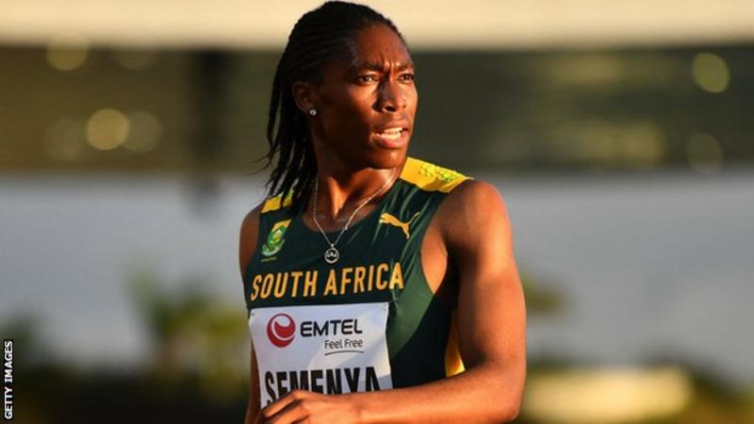 Two-time Olympic and three-time world champion Caster Semenya has branded leaders in African athletics as “cowards” for failing to stand up and fight for female athletes who are facing eligibility issues.

The 31-year-old is barred from competing in her preferred 800m race by World Athletics’ differences of sexual development (DSD) rules introduced in 2019.

Athletes with high testosterone are required to medically lower their levels in order to compete in events between 400m and 1500m.

“I think that, in this day, we have coward leaders,” Semenya said.

“In this continent, people are quiet. I don’t know why they’re quiet. They’re not fighting for their own athletes.

“You have got to show up and work, fight for your athletes, and then African athletics will be great. At this moment it’s disappointing.”

When asked by BBC Sport Africa about Semenya’s comments and whether African athletics leadership has done enough for its athletes, Confederation of African Athletics (CAA) president Malboum Kalkaba said: “Sorry, I do not have an answer”.

Several other African athletes have been affected by the DSD rules, including Burundi’s Olympic silver medallist Francine Niyonsaba of Burundi and her fellow 800m runner Margaret Wambui. of Kenya.

Last year, two Namibian teenagers, Christine Mboma and Beatrice Masilingi, were forced to step down from the 400m weeks before the Tokyo Olympics after they were informed of their elevated testosterone levels.

Both Mboma and Masilingi ended up competing in the 200m in Japan, with Mboma winning a historic Olympic silver for her country.

However, Semenya, who now competes over 5000m, has questioned African leadership’s handling of the teenagers’ situation as well as its relative “silence” on the DSD matter in general.

“Imagine what was going on through those kids’ minds. They can’t do anything, but the leaders are just sitting out there enjoying the privileges, being in the boardrooms.”

CAA director general Lamine Faty said Semenya “has the right to express her sentiments” and that concerns over DSD rules were raised by the organisation a “long time ago” and were discussed again recently at a CAA council meeting in Mauritius.

A debate about eligibility in women’s sports has been heating up, with the recent focus being on the status of transgender athletes.

“We continue to study, research and contribute to the growing body of evidence that testosterone is a key determinant in performance, and have scheduled a discussion on our regulations with our council at the end of the year,” he told BBC Sport.

‘We are never going to stop fighting’

Champion over 800m at both the 2012 and 2016 Olympic Games, Semenya has previously challenged World Athletics’ rules but lost her case at the Court of Arbitration for Sport in 2019.

She then lost an appeal and was defeated at Switzerland’s Federal Supreme Court a year later, before going to the European Court of Human Rights where her case has yet to be heard.

“We are never going to stop fighting,” she said.

“At the moment it is not about me, it’s about the young kids that are coming up now that are going to face the same problem.

“They say sport is for all, but at the moment it’s not for all.”

A switch to the road for Semenya?

As athletes prepare for the World Athletics Championships in Oregon, Semenya will be watching from home for the second time in a row.

She made her major championship debut over 5000m earlier this month at the African Athletics Championships in Mauritius – the same country where she was introduced to the world, winning the continent’s junior 800m title in 2009.

However, she could not replicate her performance from 13 years ago and had to settle for sixth place in a time of 16:03, way off the World Championships’ qualifying mark of 15:1.

“My first career was here and I was victorious, [but] it does not mean I will always win,” said after the race in the Cote d’Or Stadium earlier this month.

“It’s not about winning. I’ve won all major titles, I’m the greatest that they’ve ever seen.”

Semenya insisted she was not downbeat to miss out on a spot in Eugene, and could even move away from the track in the future.

“The World Championships this year is not really a target – that was going to be a bonus if I made it,” she said.

“I’m learning. I’m still a beginner. I’m not going to compare myself with people who have been doing the 5000m for over a decade. I’ve just started last year.

“It takes four years for a distance runner to be great. I’m trying to figure it out. It’s like a baby trying to learn how to walk.”

The South African says she is inspired by two-time Olympics champion Eliud Kipchoge’s journey from the track to the marathon.

“Eliud Kipchoge was a 5000m runner and only won one world title over the distance and then he went and became the greatest marathon runner,” Semenya said.

“So now it’s just about humanity, showing people that even if people can try to block you from what you want to achieve, you can still do it.”