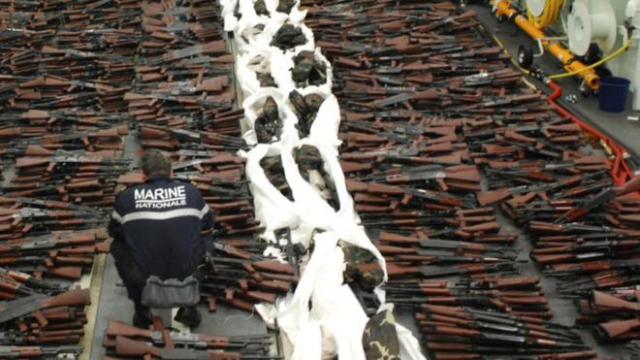 French naval forces patrolling the northern Indian Ocean have seized a ship full of weapons they say was heading towards Somalia.

They seized the weapons under a UN embargo to prevent arms from getting to Somali Islamist militants.

Earlier this month, the Australian navy intercepted a cache of arms on a fishing boat off Oman, also believed to be on its way to Somalia.

The vessel was not registered to any country and the CMF did not reveal any further information about the people transporting the weapons.

The multinational force, which was also set up to tackle piracy off the coast of Somalia, seized the weapons to prevent them from getting to the Islamist militant group, al-Shabab.

UN sanctions authorise the interception of weapons heading for Somalia.

However, the UN allows the Somali government to buy light weapons for its fight against the insurgents.

The al-Qaeda-linked militants frequently stage attacks in the capital, Mogadishu, and other cities, and still control many rural areas in southern Somalia.