Southampton sack manager Claude Puel after one season in charge

Southampton are looking for a manager with a shared "long-term vision'' after sacking Claude Puel.

Frenchman Puel, 55, took over at St Mary's last summer and guided Saints to the EFL Cup final, where they lost to Manchester United, and an eighth-placed finish in last season's Premier League.

But the board has opted to make a change, dismissing the former Lyon and Nice boss.

A statement from Southampton on Wednesday evening said the club had "terminated the contract of Claude Puel with immediate effect.''

It continued: "Everyone at Southampton would like to express our thanks to Claude for his hard work and commitment this year.

"The highlight of the season was a memorable day at Wembley in the EFL Cup final, a day our fans will always treasure. We wish Claude well for the future.

"The search for a new management team is under way.

#SaintsFC can today confirm that it has terminated the contract of Claude Puel with immediate effect: https://t.co/J91VRXhBFA

"We are confident that we will find the right fit in line with the long-term vision of the club.''

Despite the positivity around Southampton's Wembley appearance in February, they lost 16 league games to slip to eighth after Ronald Koeman had delivered sixth place before moving to Everton.

The south-coast side also suffered early exits from both the FA Cup and the Europa League.

Come the final game of the season, a 1-0 home defeat to Stoke, Saints fans appeared to have turned against Puel, chanting: "You don't know what you're doing'' and booing the Castres-born tactician.

Rumours of player unrest have continued into the summer and, on the day which saw the 2017-18 fixtures released, Puel — a Ligue 1 winner with Monaco in 2000 — has departed Hampshire just 12 months into a three-year contract. 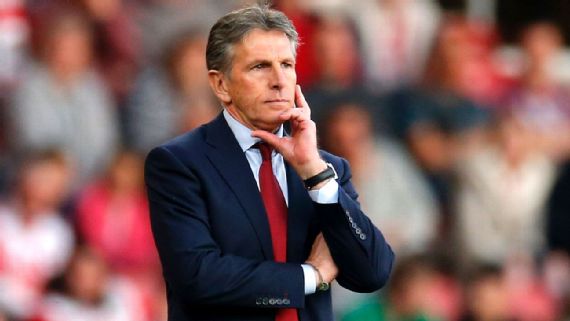 Reading's Jaap Stam is another reported contender after guiding the Royals to the Championship playoff final.

"The main sticking point for him was the lack of goals and possibly the lack of entertaining football,'' Le Tisser told Sky Sports HQ.

"No goals in the last five games at home was a big factor I think. People got a bit fed up of seeing a lot of possession in the first two thirds of the pitch but very little action in the last third, and I think that's the thing that's cost him his job.

"When you look at the eighth-placed finish and the cup final it doesn't look like a bad season so there's going to be a lot of people looking from the outside and wondering 'what has he done to deserve being sacked?'

"But if you have watched a lot of Southampton's games this season it's been a backwards step so far under Claude in respect that we had a lot less points than we did in previous seasons, a lot less goals, so I think the club probably felt we had taken a step backwards and they didn't want [that] to carry on.''