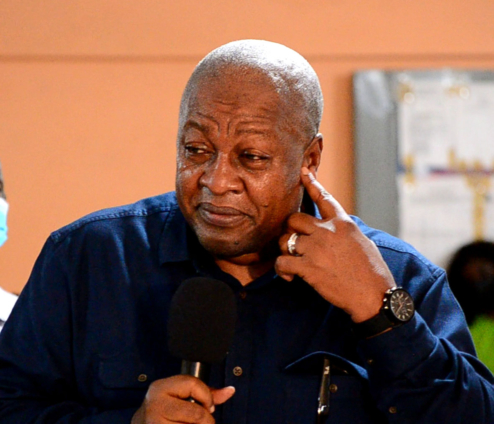 Former President John Mahama says the Akufo-Addo-led government has finally experienced the responsibilities and challenges his erstwhile administration faced when in power.

According to him, despite urging the then opposition New Patriotic Party (NPP) to be circumspect in criticising the NDC government over the management of the economy, they failed and tagged his government as incompetent.

Interacting with the people of the Eastern Region during his ‘Thank you tour’, the former President noted that the incumbent government has been unable to stay true to its words to provide the many developmental projects they assured Ghanaians during the 2016 and 2020 general elections.

The former NDC flagbearer named road construction and access to potable drinking water as some of the projects the incumbent government has failed to execute.

John Mahama said: “I told them you have not been President before so you think it is an easy job. I told them and they didn’t understand me but today, with their own two eyes, they have seen what I was talking about.

“I’ve recently chanced upon a video, where they said ‘We don’t need to borrow to fix the roads. We just have to put toll gates on the roads and we will have enough money to fix all the roads.’ But as I speak, all the roads have been left in deplorable states. Look at the Koforidua roads.”

“They said ‘by the time we finish our first term in government, no village or town in Ghana will have water or toilet problem’. Today, look at the kind of water some citizens are drinking. That is why we said talk is cheap,” he added.

Dr Bawumia believed Ghana needed someone who was capable of managing the country’s affairs and as far as he was concerned, Mr Mahama who he described as “incompetent” did not make the cut.

Meanwhile, to ensure the many challenges in the country are resolved, the NDC 2020 Presidential candidate has urged Ghanaians to turn their focus to the 2020 NDC manifesto which holds the key to unlocking Ghana’s development.

Former President Mahama, therefore, urged all and sundry in the region to throw their weights behind the NDC in the 2024 general elections

“All the answers to what Ghana is going through today are in NDC’s 2020 manifesto. The big push for infrastructure, USD 10billion infrastructure to construct our roads, hospitals and schools.

“If we all put our personal interests aside and come together as one, I am sure the NDC will take hold of the Eastern Region. It will come as a surprise to everyone that the NPP will lose their seats in this region. The 2024 election will not be a playful matter all,” he noted.

DISCLAIMER: The Views, Comments, Opinions, Contributions and Statements made by Readers and Contributors on this platform do not necessarily represent the views or policy of Multimedia Group Limited.
Tags:
Eastern Region
John Mahama
Npp government