A 75-year-old Tanzanian man has launched an elaborate search for a partner after his wife died.

Athumani Mchambua has put up advertising posters in the low income area of Mbagala in the main city of Dar es Salaam, urging interested applicants to show up for an interview.

The poster, in Swahili, says the successful candidate must be hardworking, able to handle farm work and be willing to be a step-mother to his 11 children: 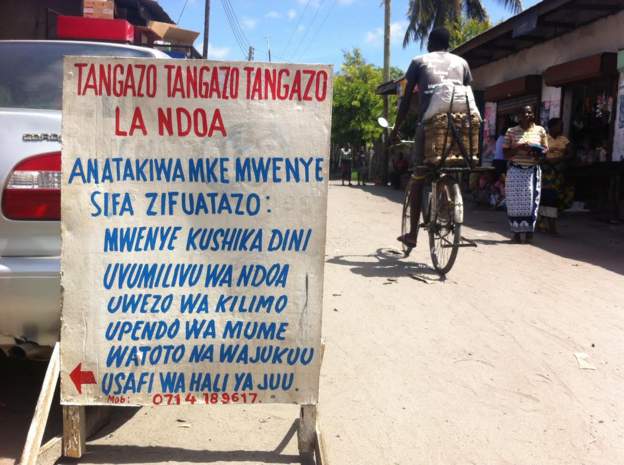 Mr Mchambua told the BBC's Munira Hussein that he wanted to do the search on his own and not through intermediaries, which is traditional in some cultures.

I felt that if I was to use a traditional intermediary to find a wife, they might find a woman and then want to keep her for themselves. That's why I decided that I search for her on my own, and put out those posters.

He has so far interviewed four candidates:

I have held the interview only once and four candidates showed up, but no one had all the qualities. Some mentioned only two out of four [qualities] but not more than that."

His daughter Dalia Mchambua told the BBC that she was happy with her father's process and was ready to accept the winning "candidate" as her mother.