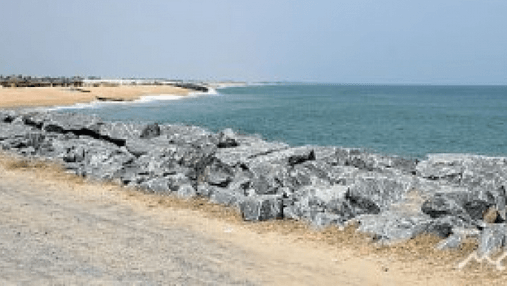 The Tema Traditional Council (TTC) has appealed to the government to urgently provide the Awudum community with a sea defence wall as the Tema Port Expansion has increased the tidal waves eroding the suburb.

Several metres of the Awudum coastline had been washed away over the years with more than 100 houses together with their associated histories lost to the sea with no trace of their existence.

A visit to the coastline show remnants of washed houses as the tidal waves roars with deafening sound hit hard at the remaining structures that are begging for survival as their very foundations have almost given way to the mighty waves.

The Ghana News Agency noted that residents’ frantic effort to stop the sea from coming into the community is making use of sandbags, used tyres, among others could not stand the ravaging tidal waves.

Nii Amarh Sompuno II, Spokesperson for the Counsel and Tema Shipi, appealing said several letters to the relevant ministries over the years did not yield the expected results adding however that when the erosion started about 30 years ago some people were relocated into Manhean.

Nii Sompuno said the former vibrant fishing community was now in a sorrowful state and therefore needed urgent action to prevent the tidal waves from completely eating the Awudum community away.

“Even though this issue started some years back, it is now urgent and scary as the tidal waves have now increased three times due to the port expansion, they blocked the water there directing the waves here,” he said.

Mr Sumaila Agabby, Chairman for the Tema Newtown Assembly Members also pleaded on behalf of the members for government to hear their cry to save the community saying they needed a sea defence in the nearest possible time.

Mr Joshua Larbi Mensah who has resided in the community for about 60 years reminisced the beautiful beach and community they used to have and indicated that it was very sad that the government was accruing a lot of revenue from the Port but they as a community were not benefiting from it as they watch their buildings been washed away to the building of the Port.

The GNA noticed that some persons were still putting up houses in the community irrespective of the threat of the tidal waves to consume it.