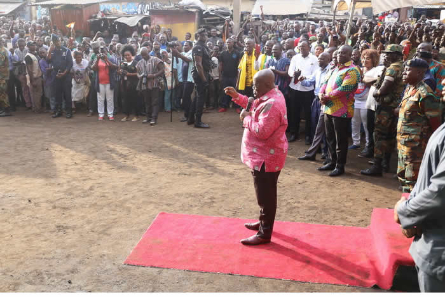 It has taken barely nine months for cracks to develop over a political relationship that is increasingly getting complicated.

At the center of the quarrel is a 2016 electoral promise to abolish some duties on imported spare parts. To much jubilation in Abossey Okai, the hub for spare parts in Accra, government announced in March 2017 it has removed import duty taxes on spare parts.

"We heard they have cleared import duties on our parts. We were happy here. We jubilated, did everything. We thought this is the time our business is going to boom."

But the duties abolished on paper is yet to accomplish anything in their pockets.

Photo: Shop owners at Abossey Okai have been vocal about the rising cost of spare parts

"…Can you believe that when we went to clear our goods things were the same as it was. It was even higher..it's a big disappointment for us," a shop owner told Joy News Wednesday.

How price of imports has gone up after an act was supposed to have brought it down is explained by new measures introduced by the Ghana Revenue Authority.

The GRA has introduced a new system that values spare parts and calculates the cost of clearing them.

It is the new benchmark that has seen the cost of spare parts go up, which government has explained to mean that businesses are now paying the true cost of goods they import.

Deputy Information Minister Kojo Oppong Nkrumah explained government through the paperless port system has sealed all the "revenue loopholes" at the ports.

And its for good reason because government needs to "fund an agenda we all agree is ambitious."

He called it a "balancing act" of satisfying the dealers and closing loopholes and government is trying to "walk that fine line."

The shop owners at Abossey Okai cannot find that line. The only line they can find is the bottom line of prices going up and their praises going down.

The tax abolishment promise has been fulfilled but another revenue improvement promise that has left them feeling unfulfilled and the dealers feel they have been dealt a raw deal.

And so the people in Abossey Okai who saw Akufo-Addo and liked him are not happy.

President Nana Addo Dankwa Akufo-Addo had been in Abossey Okai in November 2017 to thank the dealers.

He told them that if they had not "thrown its support behind the NPP and myself, winning power would have been extremely difficult, so I am grateful to you.”

There was applause. Now there is a pause.

For them, its fast becoming a fact that the political pact has had no impact and government must act fast.