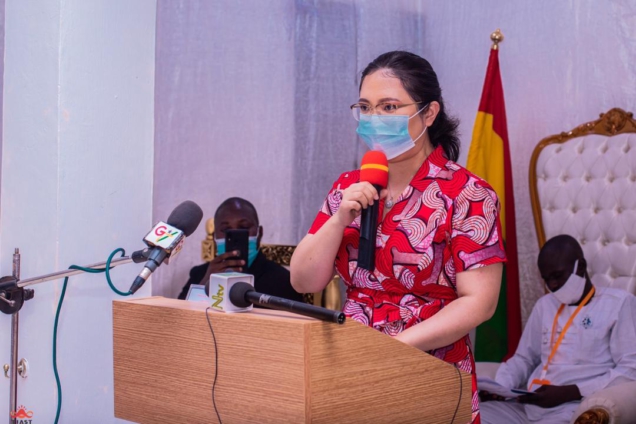 Farmers and players along Ghana’s agricultural value chain  have been assured of  brighter prospects in the sector, thanks to the ongoing collaboration between the agricultural technology and innovation firm, the Torchbearer International Agricultural Science and Technology (TIAST) Group and Stanbic Bank Ghana.

Managers of TIAST assured farmers and other players in the agricultural value chain that “we are poised to fund the equipment, technology and provide off-take trading locally to help Ghanaians get more value from agricultural produce such as cassava, rubber, tomatoes, corn and rice through processing, with the requisite financial support from Stanbic Bank.”

The theme for the one-day interaction was ‘Financial and technological boost for the agricultural industry in Ghana.’

The Tamale engagement comes on the back of the signing of a Memorandum of Understanding in Accra in September between TIAST and Stanbic Bank to support the production and processing of cassava and its derivatives.

Describing the collaboration as a game changer, Chairperson of TIAST West Africa, Madam Lisa Hao said her outfit and Stanbic Bank were setting up a sustainable mechanism for cassava industrialisation processing, saying “Stanbic Bank will provide financial support to their qualified clients while TIAST will build the processing lines.”

“We off-take immediately you produce the required quantity, whether on weekly , monthly or yearly basis; we provide the packaging material for the processed goods for the processor and we arrange for shipment, to transport the products from the factory,” TIAST’s Chairperson explained.

Under the arrangement, crops will undergo processing via technology from  cassava ( into flour, ethanol, syrup and chips),tomato (into paste, juice),Maize (into flour, oil, syrup and flakes), yam (into chips, starch flour).

Madam Hao gave the assurance, her outfit would work on the cassava starch value chain and commit to protecting all interested parties, stating, “we want to do what we can to boost cassava industrialisation.”

Chief Operating Manager at TIAST, Mr Feca Xiao announced the establishment of the Group’s headquarters in Dawa, Tema, which facility he noted would include a research design and manufacturing centre, international conference centre, warehouse and business centre.

Welcoming the TIAST, Stanbic team, the Overlord of the Dagbon State, His Royal Highness Ya-Na Abukari II recalled he had during his investiture promised to mobilise the people of Dagbon as part of his development agenda to collaborate with other stakeholders and partners to increase access to farm inputs and services to smallholder farmers and to support in the development of commercial agriculture in Dagbon, “utilising the vast arable land for the benefit of our people.”

He said, “my heart desire is to see this important project which seeks to promote business interest of all actors within the cassava industry value chain for effective contribution to Ghana’s development, grow bigger and better.”

The regional officer of the Ministry of Trade and Industry, Mr Hamidu Hamza Saana was confident that the extension of financial and technical support to businessmen and women would serve as a springboard for farmers who were already in that business and those who were yet to join to harness their resources and expand their potentials.

“TIAST’s intention to assist in achieving industrialisation of an aspect of the agricultural sector of the Ghanaian economy ties in perfectly with government’s One District, One Factory policy as it would speed up the industrial transformational agenda of government,” he stated.