Time to amend the constitutional powers of the Electoral Commissioner 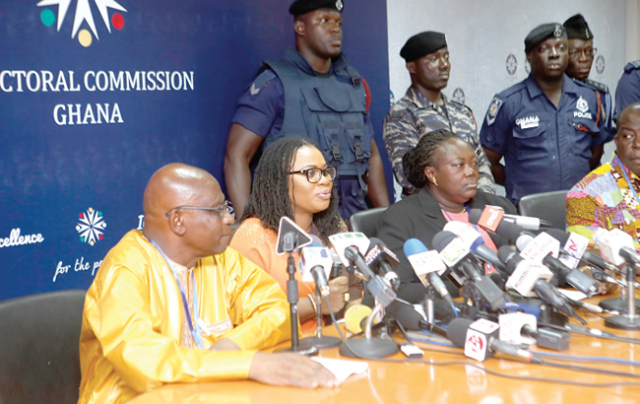 Many of us were not be there but it is obvious the members of the Constituent Assembly commissioned to deliberate and write the current Ghana’s 4th Republic Constitution modeled a good part of their constitutional framework in line with the established democracies, such as United States, Britain, and the like.

For instance, the concepts of executive presidency, the system of three branches of government, as well as checks and balances embedded in this country’s Constitution are all the byproducts of U.S. Constitution. At least for this reason alone, it is not out of place then to discuss the unfolding constitutional events in Ghana by making some associations with the United States political system.

In any event, the concepts referenced earlier not only provide meaning, but also they offer unshakeable foundations upon which multiparty culture is built. One other basic element of democracy the framers of the 1992 Ghana Constitution woefully failed to borrow from the American Constitution pertained to how elections are conducted effectively and independently throughout the ten regions of Ghana.

In effect, one can safely argue that Ghana’s general elections—so far—are exhibiting some signs of electoral results described as “free and fair” as witnessed in the 2016 presidential election.

However, we must also add that merely declaring an elections as “free and fair” does not necessarily guarantee its independence. This clearly explains why time-tested democracies like the United States or Britain does not give or invest all its electoral powers in one person’s hands. Stated differently, there is no such thing or position as electoral commissioner in the United States body politic, period.

American political system simply has a regulatory body called Federal Election Commission (FEC), and its main function is to enforce campaign money/finance laws relating mostly to presidential elections. Let us keep in mind the FEC does not conduct elections throughout United States as Ghana’s electoral commission has immense power to do.

Each state/region in US conducts and declares its own election results as the local people cast their votes; there is no central command center in Washington DC where all the electoral results come in to be collated by powerful electoral commissioner(s). Certainly, there must be a compelling reason(s) for the framers of US Constitution not mandating the creation of electoral commission office headed by an “all-powerful” one-person commissioner/chairperson who may have “statutory power” to nullify an election outcome.

The point is, like the United States, Ghana’s present political system also strongly shares democratic view that “…All powers of Government spring from the Sovereign Will of the People [Ghanaians]” (see: preamble of 1992 Ghana Constitution). If that is the case, then why do Ghanaians “invest” all their electoral destinies in one person’s hands in the form of electoral commissioner? People’s sovereignty assumes supremacy in authority or power.

Since Ghana’s constitution duly acknowledges that the sovereignty resides with Ghanaians, it does not make much sense for the country to sit back and wait impatiently until one person called electoral commissioner comes out to declare who becomes president of Ghana.

One can recall during the 2016 presidential election after waiting for about 72 hours or two days the Electoral Commissioner Ms. Charlotte Osei finally showed up and said something to the effect that by the power or authority “invested in me” I declared Nana Akufo-Addo the president-elect of the country’s election. “Power invested” in a person to declare who becomes the president of the sovereign state of Ghana?

Well, if any Ghanaian wonders why Ms. Charlotte Osei and her deputies were blatantly displaying unprofessional attitudes, arrogance, and accusing each other of engaging in procurement illegalities, leading to their firing, it was mainly because of the mammoth powers given to the electoral commission(er) under Articles 43 – 47 of the Ghana’s Constitution. Remember, power can corrupt with corrosive effects and makes one harbors a sense of untouchability.

Admittedly, many African governments have this common problem whereby one person is given too much power in terms of conducting elections. History has shown that this widespread phenomenon enables leaders who don’t want to relinquish power honestly to manipulate election results through their “powerful” commissioners and in the process plunge some parts of the continent into deadly, internecine power struggles.

At this point, any well-meaning Ghanaian should not use this legitimate removal from office, regarding the electoral commissioner and her two deputies, as a cheap propaganda rallying cry to win support from the uninformed citizens among us. Rather, the three electoral commissioners’ firing must unselfishly be used as a reflective moment by all the political parties in Ghana, whether in power or not, to explore more effective ways of conducting genuine and apolitical future general elections whose results cannot be easily doctored by any unelected individual handpicked to serve the whims of a power-hungry leader. If anything at all, for starters, the EC position must be rotated every year among all the commissioners made up of all the members of the major parties.

Undoubtedly, the best course of action, as we speak, is to seriously consider the possibility of amending the country’s military-government-centric 1992 Constitution, among others, by watering down the immense powers granted the electoral commissioner. The sovereign people of Ghana need to wake up!

Bernard Asubonteng is political science lecturer based in U.S. Send your comment to: detrio03@aol.com