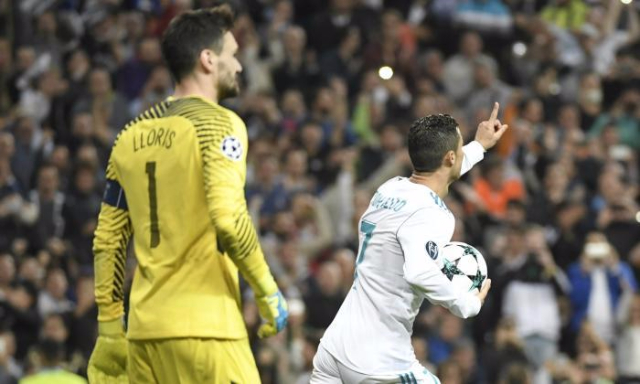 Tottenham Hotspur took a big stride towards the Champions League knockout phase after forcing European champions Real Madrid to fight back for a draw in Spain.

The Spanish champions equalised before half-time when Aurier's rash challenge on Toni Kroos was punished with a penalty, Cristiano Ronaldo drilling in to extend his tally as the leading scorer in Champions League history.

Significantly, the English side's hopes of reaching the last 16 for only the second time were strengthened by Apoel Nicosia's 1-1 home draw against Borussia Dortmund.

Manchester City produced another impressive display as they beat in-form Serie A leaders Napoli to maintain their 100% winning start to this season's Champions League.

Billed as an encounter between the two most scintillating attacking sides in Europe, City fully lived up to the hype before the break, giving their Italian rivals a brutal lesson in high-pressing, incisive football.

The win sees City maintain the top spot in the Group with 9 points. Shakhtar Donetsk moved to second with 2-1 away win over Feyenoord.

Liverpool recorded the biggest away win by an English team in the history of the European Cup as they thrashed Slovenian side Maribor to go top of Group E while leaders ahead of matchday 3 games, Sevilla, suffered a shock 5-1 defeat at Spartak Moscow.

For Group G, last season semifinalist, Monaco are in real danger of not making it to the next stage, after no wins in three matches. They were beaten 2-1 at home Besiktas. The other game produced five goals with RB Leipzig claiming a 3-2 victory at the expense of FC Porto.