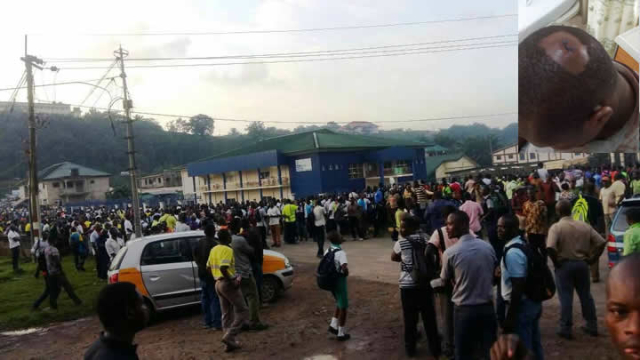 Some seven workers of Goldfields mines at Tarkwa in the Western Region have been picked up by the police for participating in a protest Monday morning.

The workers union has however appealed the decision.

Speaking to Joy News, however, some workers say management of Goldfields has been coercing them with the military to sign the severance agreement.

“You don’t need me to sign a redundancy letter…in the full glare of the police. That is certainly condemnable,” Deputy General Secretary of the Mineworkers Union, Abdul Moomin-Gbana told News Desk on Joy News Channel.

The unsettled staff of goldfields decided to protest against management for the decision to arbitrarily lay them off.

Security personnel numbering about 200, a joint police and military force, however, interrupted the protest.

The security personnel rained terror on the protestors, firing rubber bullets and tear gas into the crowd, one worker who spoke to Joy News reported.

He further described the atmosphere at Goldfields as chaotic.

“They have hit a lot of our colleagues. One man has been hit in the head and as at now I don’t know where he is, they took him away in a taxi,” he said.

Photo: John Kennedy, a worker of Goldfields Ghana Limited was shot with a rubber bullet.

The management of Goldfields says the protestors only represent a small minority of the workers who are aggrieved with recent restructuring of the workforce.

In a communique, they stated that the military personnel have been there since last week to maintain order.

“Some military personnel were deployed at the main access gate to protect employees from outsiders and a small minority of employees who are opposed to the contract mining module who have attempted to forcibly disrupt the process,” the statement read in part.