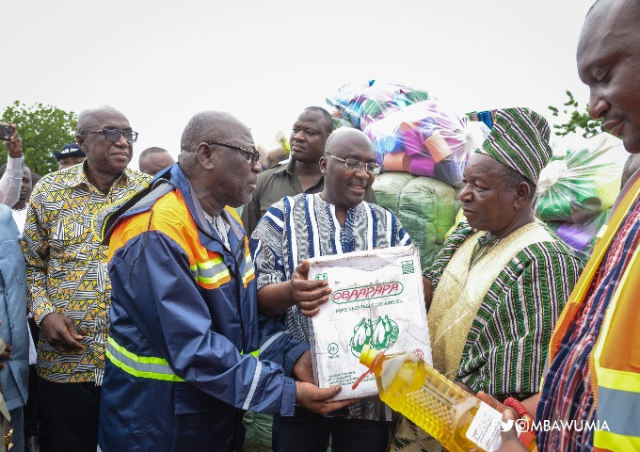 The Regional Director Isaac Seidu has also been queried to explain how everything happened; Director General of NADMO Eric Agyeman Prempeh confirmed this to Joy News, Wednesday.

The sanctions come a day after reports of the expired products went viral on social and traditional media.

A number of disaster victims were hospitalised shortly after they consumed food prepared with oil and rice donated by the Vice President Dr Mahamudu Bawumia on behalf of the Upper West Regional NADMO.

It emerged some of the oil distributed to the disaster victims had expired. On the products were August 28 and September 1. The vice president had donated the items on September 21 and 22.

There were media reports that some of the rice donated were also expired.

A day after the reports went viral, NADMO issued a statement taking responsibility for the expired products. It explained six cartons of expired oil had accidentally been included in the products distributed by the Vice President.

The Director of security will also be part of the committee. The committee has 14-days  within which to present its report.

Whilst he confirmed that some of the oil distributed were indeed expired the rice was not.

Meanwhile, the Majority in Parliament says the Vice President cannot be blamed for the unfortunate incident.

Even though they admit the incident was regrettable, Chairman of the Government Assurance Committee Yaw Frimpong said the Vice president could not have inspected the items personally before distributing them.