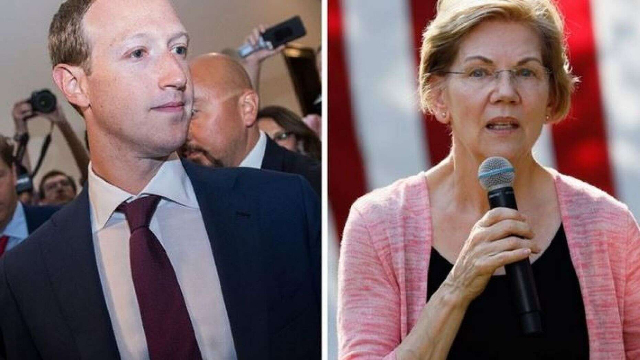 The minute-long video opens with a brief audio clip — recently leaked to The Verge — of Zuckerberg saying, “If she gets elected president, then you go to the mat and you fight.” The tech mogul said Facebook would sue the federal government if Warren wins in 2020 and tries to break up his company.

“The Rich and Powerful Are Afraid of Elizabeth Warren” flashes across the screen during the Instagram video, followed by a montage of clips from cable news channels including Fox News Channel, CNBC and Fox Business Network, showing hosts and guests opining that Wall Street and corporate America won’t enjoy a Warren administration.

The Massachusetts senator, a Democrat, has proposed that Big Tech firms like Facebook, Amazon and Google be broken up over antitrust concerns. Facebook, which is currently the subject of at least three different probes of its business practices — by the Justice Department, a group of state attorneys general and the House of Representatives — was forced to pay the Federal Trade Commission a record-breaking $5 billion fine over privacy violations earlier this year.

“Well, it would be a sub-optimal situation for the banks,” says one guest in the clip.

“The pharmaceutical industry would also similarly say, ‘Watch out,'” another guest warns.

“I think Elizabeth Warren is the dangerous one,” claims a different guest.

I believe Washington should work for you””not billionaires or Wall Street. I’m Elizabeth Warren, and I approve this message.

“Are you telling me that the billionaires are not in favor of my being president of the United States?” Warren asks at the close of the clip. “I’m shocked!”

After Zuckerberg’s audio leaked, Warren doubled down on her plans to break up Big Tech in a series of posts on Twitter.