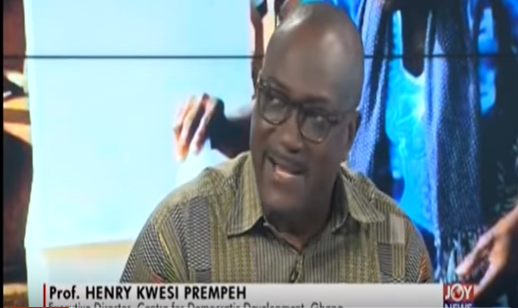 A “Yes Vote” campaigner for the December 17 referendum, Prof H Kwasi Prempeh, says he will vote for the motion to cure the mischief of “winner takes all” which has plague Ghanaian Politics.

Explaining how a “Yes’ vote can achieve this, the Executive Director of Ghana Center for Democratic Development (CDD-Ghana)  said if political parties are mandated to participate in electing Metropolitan, Municipal and District Chief Executives (MMDCEs), no longer will a party that wins the presidential election filled only persons belonging to its fold in government.

Persons belonging to the opposition can also be in power only if they can win local elections, he said on JoyNews’ Pm Express Monday.

“Why is it so wrong to give the opposition an opportunity through local elections to be able to also elect an MMDCE that belongs to their party?”

Sharing the benefit of this arrangement, he said that “means at every time in the country, you have the main parties in the country involved in governance”

The CDD-Ghana boss argues that since necessarily the central and local government must cooperate to run the affairs of state, this is one way to foster cooperation among the political parties.

We are now going to have an opposition party that is not going to be fixated about opposing for opposing sake because they will also be busy with governance, Prof. Prempeh added.

DISCLAIMER: The Views, Comments, Opinions, Contributions and Statements made by Readers and Contributors on this platform do not necessarily represent the views or policy of Multimedia Group Limited.
Tags:
CDD
December 17 Referendum
Kwasi Prempeh