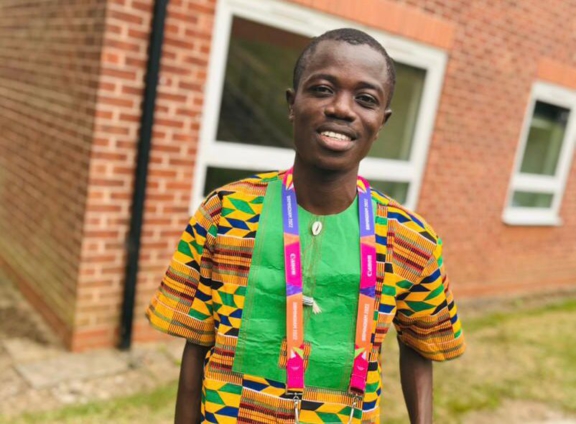 A huge announcement from a very unfamiliar source followed his performance at the Commonwealth Games, an admirer from afar and a man who had the power to make William Amponsah the first Ghanaian to run in the Great North derby in Newcastle in September suddenly resurfaced after an initial encounter 5 years ago.

Executive Director of Transforming Teaching, Education & Learning, Robin Todd, tweeted immediately after William Amponsah run a new personal best of 13.51.63 and placed 13th in the 5000m final at the commonwealth games. Todd did not just watch the race but had encountered the 22-year-old, years ago and tweeted this with great excitement

“In partnership with Ghana Athletics we have secured William Amponsah an elite place at the Great North Run in Newcastle, UK on 11th September. This is the world’s largest Half Marathon with over 60,000 runners. William will be the first ever Ghanaian elite to run the GNR.

And that was not surprising from a man who had experienced William Amponsah right from the start. In 2017 when Todd moved to Ghana, he participated in the Accra International Marathon and encountered a 17year old who won the 21-kilometre race by an absolute mile. Todd placed second but was impressed by the exploits of the young man and handed him great help.

Soon after the encounter, Todd convinced his running club-Grant Chapman at Royston Runners (UK) to buy William Amponsah a GPS watch, put him on Strava and took William and his colleagues from Daakye Runners Club in Agona Swedru through a structured training programme.

It was right in Agona Swedru where a very young William Amponsah was spotted by the founder of the Daakye Runners Club’s Charles Forson, who was watching on during a competition back at the Swedru School of business.

Ghana very rarely produces long-distance runners who make strides at the international level. At best, a few talents try out the long distance but hardly transcend the borders so it took something beyond the normal to have Forson believe Amponsah was cut out for exactly that.

After a year of intense training together, the Daakye Club began to reap huge dividends, Amponsah first won the 2018 Asante Akyem Marathon and placed 3rd in the Dubai marathon, subsequently. In 2019 Agona Swedru native won the Kwahu Easter Mountain Marathon (2.29.16) and broke the existing record at Millennium Half Marathon (1.06.22).

A year later, the University of Education student broke 5000m, and 10,000m records at the Ghana Universities Sports Association games and did same in the GUSA cross country.

This year Amponsah beat off competition from Koogo Atia and former Kwahu Marathon winner, Ishmael Arthur, in a time of 1:12:35 to defend his title in the 21km race which started from Nkawkaw and ended at Mpraeso. He participated in the Africa University games held in Kenya and won bronze in 10,000m in a time of 30.34.57.

Amponsah represented Ghana at the Commonwealth Games as West Africa’s half Marathon champion and the first after Robert Hackman to participate in the 5000m final at the multisport event.

Only three Ghanaians in history have represented Ghana at the commonwealth games, Robert Hackman (1974), Juliana Sakat 2014 – (18.04.61) and now William Amponsah

William Amponsah’s career has only begun, but the last five years have been nothing short of progress and great ambition and looking forward to mounting bigger stages like the Olympics and World Athletics Championships is only natural.

Commonwealth Games 100m champion, Ferdinand Omanyala, is defying the odds by winning sprint medals for Kenya who are experts in long distance. If Amponsah gets the right sponsorship the opposite will be true.

DISCLAIMER: The Views, Comments, Opinions, Contributions and Statements made by Readers and Contributors on this platform do not necessarily represent the views or policy of Multimedia Group Limited.
Tags:
Birmingham 2022
Commonwealth Games
William Amonsah