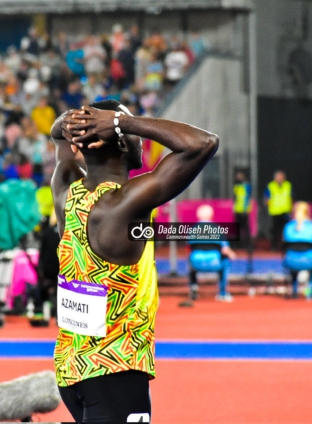 “Missing out a medal was most disappointing of course, that would have been added to my CV, as a Commonwealth Bronze medalist, but it happens, it’s okay I will just take it,” a disappointed and upset Benjamin Azamati told Joy Sports’ George Addo Jnr in an exclusive interview, exactly a month after missing out on 100m Bronze at the Commonwealth games by 0.02 seconds. The pain in his voice was quite comprehensible if you have followed his story as I have.

Following the disappointment of not making at least the 100m semifinals at the World Athletics Championships, Azamati looked to the commonwealth games for redemption. The 100m Heats and Semifinals had come faster than he thought and soon the big night was on the horizon.

The night sky in Birmingham had pregnant clouds looking over the well-laid tracks at the Victoria Park in preparation for a moment in Ghanaian Athletics history. Had Azamati medaled in the 100m final, he would have become the second Ghanaian in history to win a medal over the distance since Ohene KariKari won bronze at the 1974 Commonwealth Games in New Zealand. Medaling at the games would have handed Ghana’s fastest man his first-ever medal on the international stage too.

Ambition was boldly written on Azamati’s forehead and his eyes gave away so much when he popped up on many television sets in Ghana as the stadium announcer introduced the finalists ahead of the race. It really felt Ghana belonged to the podium that night and why not? Azamati had navigated great races in the heats and semifinals of the commonwealth games and was third fastest based on season best, so the expectation back home had gone through the roof.

The former University of Ghana student was unusually pumped for this final because it was the first time he had run heats, qualified for semifinals and finals in a competition. There were heartbreaks on similar grand stages before, first missing out on the 100m semis at the 2020 Olympic Games and suffering the same at the 2022 World Athletics Championships this time by thousandths of a second. A medal would have been the superb completion to what had been a good year.

The West Texas A&M student had run sub 10 times thrice in the season, the record-breaking 9.90s at the Texas relay in March, 9.96s at the Lone Star Conference Outdoor Track & Field Championship in May to retain his LSC title and 9.86s (+3.0) all for WTAMU Azamati’s form was that good and came as no surprise when he finished 4th (10.18s)behind the Olympics 200m champion Andre de Grasse in his first diamond league appearance in Oslo and followed that up with a maiden diamond league win (10.25s) in Paris.

The final also meant pleasing his new suitors – ASICS – who months before had handed him a bumper endorsement and sponsorship deal for his enterprise thus far. So the lad representing Ghana in lane one on the night of 3rd August 2022 had a simple job to execute.

The start list had Africa’s fastest man, Ferdinand Omanyala, defending champion Akani Simbine, and England’s Blake Netheneel Mitchell Blake. Azamati had work to do considering his was the seventh fastest by ranking in the times recorded for the final.

After the stadium announcer was done introducing the finalists on the tracks, it was down to technical men assigned to the sprint final. Under the lights at the Victoria Park in Birmingham, there was a brief command for silence across the stadium and everyone including the finalists waited with bated breath for the gun. After a few minutes, the starter’s gun was fired and the race of a lifetime began.

Azamati, unlike his previous races in the heats and semifinal at the Birmingham Games, had a fairly good start. He got out of the blocks pretty well and was striding at a great pace. At 60m, Ghana’s national record holder was number 2 in the race but the final 40m would prove crucial as he explained’

“The 100 final was good, I had a fairly good start. I think somewhere in the 60m, I was second. But in the last 20 meters, I think I looked at the clock which made me lose focus and then that Sri Lankan guy was able to pass and get third.”

Azamati came agonizingly fourth (10.16s) and missed out on a medal in 0.02 s-.Ferdinand Omanyala had won the race, beating defending Champion Akani Simbine. The bronze medal that looked most likely for Ghana was snapped by Sri Lankan Yapun Abeykoon. The pain of losing out on a medal was expressed across social media with many fans contributing to the Azamati discourse that lasted for days. The new ASICS athlete was of course the worst affected.

“It was a hard pill to swallow cos the guy who got third, I’ve raced him about twice this year. One happened to me in the Commonwealth Games semifinal where he got fourth and me, third.
“We were actually the two slowest times to get into the final and then he happened to get third and that makes it hard for me to believe he beat me in the final. But I made it a race and he executed his race very, very perfectly and so picked a win on me.”

As if losing 100m Bronze wasn’t enough, Azamati missed out on the 4x100m relay medal by no fault of his. Ghana’s relay quartet was disqualified shortly after making the final for failing to inform the officials of a change in running order at least an hour to race time and this was unbearable according to the US-based athlete.

“It was very disappointing. When we got home Sean left back to London that same day – shows how disappointed he was. I also locked myself in the room for 2 days, I wasn’t going out or anything.
They had to come check me and looking at the times of the finalists, we think we could have done better”.

Ghana’s quartet even without Joseph Manu and Emmanuel Yeboah looked good in the semifinal with Barnabas Agerh and Rasheed Saamenu stepping in. Ghana placed third in Heat 2 in a time of 39.05s only to be disqualified from the entire competition. There were high hopes of the medaling as the semifinal was run without Ghana’s most trusted anchor leg- Joseph Paul Amoah. Azamati says getting over the incident will be tough.

“The mistake caused by somebody is unforgivable. You can’t make the mistake of not going to confirm the list before the relay starts. That makes it more disappointing.

“Our hard work, training and everything – just to get there and the only time we could get on the podium, was in the Commonwealth games and this happens? It was very, very disheartening,” he added.
“Even in ’96 where they knew they wouldn’t make the final or anything, they still haven’t forgiven them – they still talk about it how much more us who felt we could’ve won something? So it’s something which will stay with us for a long time.
“It’s a story we’ll tell the upcoming athletes and I hope they don’t make the same mistake again.”

Much of which to be proud

“I have learnt a lesson – I’m not going to look next time – but that final was a good one. I’ll just learn on that and use the experience I have gathered, going forward in my career,” Azamati with his cap and still wearing one of the colourful shirts from the World Athletic Championships, told me with some intensity.

The Pain had done him in but the experience was worth it. A year of near misses, but the kind of energy to move onto to bigger things. Azamati along with the new crop of Ghanaian Athletes have reignited the country’s interest which is a big plus for their budding careers already. He also secured himself ASICS sponsorship this year, which means at 23 there would be more opportunities in the coming years to right the wrongs after turning professional. Azamati, though hurt, is happy about the experience gained.

“That was the only competition, I run a semifinal and final on the same day. So this is a learning curve for me and I hope to put the lessons to good use. The Diamond League in Oslo was the best experience for me, I learnt so much because it was the race I run with a lot of Professionals, It was right there my mentality changed, I’m keeping the lessons with me.

Life as a Pro begins in earnest

There will be no NCAA competition for Azamati in the coming year after cutting ties with the college competitions. He would be expected to go round the world competing in the professional leagues including the diamond League and hoping to improve with his current deal with ASICS.

“Being professional was good. I had the feel of it last season, so this offseason, I know the work I have to put in, I know how hard I have to train.

“It’s not the NCAA – I’m in a crop of athletes where one mistake will make you lose a race. So I have to do my work really well and I think it’s a very good and bold step to go professional. So I have to put in the work to be ready to show them.”

Azamati will be looking to qualify for the next year’s World Athletics Championships in Budapest and win a couple of diamond league meetings to keep fit before the time.

DISCLAIMER: The Views, Comments, Opinions, Contributions and Statements made by Readers and Contributors on this platform do not necessarily represent the views or policy of Multimedia Group Limited.
Tags:
Benjamin Azamati
Commonwealth Games
World Athletics Championshisps