Women farmers urged to explore other sources of income - MyJoyOnline.com

Women farmers urged to explore other sources of income 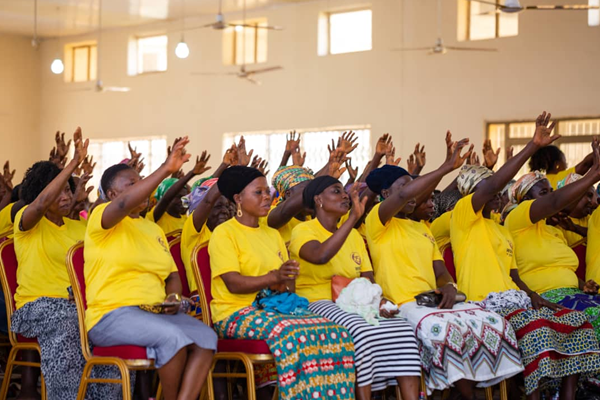 A member of the Board of Directors of Ghana Cocoa Board (COCOBOD), Nana Adwoa Dokua has urged women in cocoa farming to look beyond cocoa cultivation as their only source of income.

According to Nana Adwoa Dokua, these women may need the extra income to support themselves especially when they are facing some challenges in the farming sector.

Nana Adwoa Dokua who is also the Ambassador for the Women in Cocoa and Chocolate Network (WINCC) entreated these women farmers to develop skills in other fields including producing various cocoa-based finished products.

She noted the women can produce various products from cocoa sweating including jam and marmalades, drinks, cocoa liquor and potash for soap among others.

A total of 300 women cocoa farmers attended the forum organized to commemorate International Women’s Day by the Women in Cocoa and Chocolate Network (WINCC).

The forum was under the theme, “Balance for better for sustainable cocoa production, consumption and livelihoods”.

It provided a platform for women in the cocoa to connect, learn and share lessons that ultimately empower them.

Present at the event was the Country Representative of Solidaridad, Suzan-Hermina Yemidi, who applauded the women for their contribution to the growth of the cocoa sector in Ghana.

She revealed that as part of supporting the cocoa consumption drive in Ghana, Solidaridad through the Women in Cocoa and Chocolate is exploring ways to empower women in the cocoa sector to develop products from cocoa.

The Municipal Chief Executive Officer of Upper Denkyira, Isaac Awuah said the municipal assembly will establish a soap making factory under the government’s One District One Factory policy (1D1F).

According to him, the factory is expected to use cocoa husks to manufacture soap.

Mr. Awuah encouraged the women to take advantage of the siting of the factory to process their cocoa husk into potash for sale to the company when it starts producing to earn additional incomes.

A cocoa farmer, Abena Yeboah, from Berekum on behalf of the women expressed their commitment to explore various opportunities for additional incomes from cocoa.