Yoga is not only an exercise but philosophy of life - Indian High Commissioner - MyJoyOnline.com 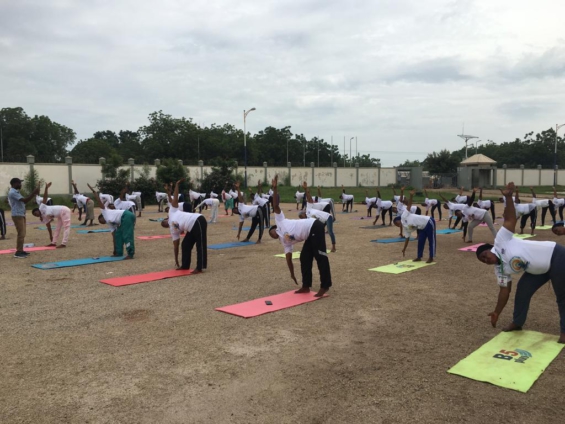 The Indian High Commission in collaboration with the Huda Raka, an Indian-friendly group in Tamale has celebrated this year’s International Yoga Day, the first of its kind in the region.

The celebration is to strengthen the relationship that exists between the Indian community and the group.

Dignitaries who graced the occasion included the Indian High Commissioner to Ghana, Sugandh Rajaram, the Northern Regional Minister, Alhaji Saani Shaibu, the Mayor of Tamale, Sule Salifu among other dignitaries and the Huda Raka group.

Speaking at the event, the Indian High Commissioner to Ghana, Sugandh Rajaram, said June 21 was chosen by the United Nations as the International Day of Yoga because it is the longest day in the Northern hemisphere, wherein the world receives the maximum sun energy: the basis of yoga.

“As you are all aware, 21 June in the Northern hemisphere, we have the longest day. That means we get the maximum energy from the sun on that day, and energy is the basis of yoga.”

The High Commissioner said yoga means to unite, which is not just an exercise but a philosophy of life.

He said India has six major streams of philosophy of life and yoga is one of them.

The Northern Regional Minister, Alhaji Saani Shaibu touted the relationship that exists between Ghana and India.

He said the support received from the Indian government is an indication of the cordial relationship that exists between the two nations.

“The relationship between Ghana and India is growing stronger and stronger by the day. The provision of social amenities in the area of education, health and even in the road sector is unmatched,” he added.

The Minister said sod was cut for the construction of the Tamale-Walewale phase one and two roads project with funding from the Indian Exim Bank last week.

He said the project is to dualise the Tamale-Bolga road to Savelugu, adding that the second phase will be expanded and extended to Walewale.

He said plans are far advanced to finalise an agreement that will see to the construction of a third phase from Walewale to Paga.

Alhaji Saani Shaibu said the introduction of the tricycles which currently take care of about 60 percent of the transport needs of people in the region comes from India.

He commended the Indian government for celebrating the international day of Yoga in the Metropolis.

The Secretary of the Indian family group in Tamale, Saani Mohammed Lukman said Huda Raka is a citizen diplomacy group that seeks to complement the collaboration between Ghana and India.

He said the group has been awarded a certificate of assistance that will enable it to have access to support from the Indian High Commission in the area of education, agriculture, health and business among others.

Mohammed Lukman said plans are being put in place by the Indian High Commission to offer the group educational scholarships to India.

“I can tell for a fact that the relationship between the group and the Indian High Commission is very cordial and I am expecting that we move very far with this kind of collaboration,” he added.

The Secretary said the group is also in talks with the Indian High Commission to extend their expertise in agronomy to train farmers in the area.

He added that plans have also been made to help the group in the area of business.

“Last two months we had a businessman from India coming in to speak to our group and identify the kind of business the members are engaged in and try to see how they can help in the area of business,” he said.

Mohammed Lukman admonished people in the Metropolis to disregard rumours that the Huda Raka group is being indoctrinated by the Indian community.

“For some time now there has been a bad notion that the Indians have come to introduce to us their form of religion and that is what we are embracing as a group and I am surprised that, that rumor has gone to the extent that some revered imams are buying into it and are using it in their sermons and I am surprised,“ he said.