Youth must be trained to have spirit of service and humanity - Kufuor - MyJoyOnline.com 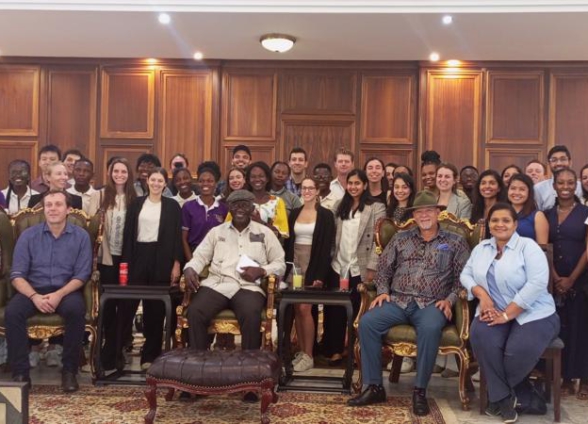 Former President John Agyekum Kufuor says there is a strong need for the country’s youth to be trained to have the spirits of service and humanity.

He says elders in various communities must ensure young people are imbued with these spirits, right from the home for the betterment of the country.

The former president was speaking when students from the University of Columbia Business School, USA and some Kufuor Scholars paid a courtesy call on him at his residence.

The students from USA are in Ghana to learn about the country’s cocoa sector and the history around it.

Asked what he would do differently if he had the chance to become president again, Mr Agyekum Kufuor said he is not interested in being president again but advised that anyone that gets the opportunity to lead must stick to the basic principles of service and humanity.

“The basic principles I don’t think should change, it’s all got to do with humanity, bettering the lot of mankind across board,” he said.

“Our decisions as leaders or politicians at the top must have a positive impact at the bottom; it should be to better the interest of the people always” the former president added.

He cautioned leaders against over reliance on technology when it comes to decision making in this era of artificial intelligence.

“We are already talking about artificial intelligence; we do not want to put people in a situation where decisions are made without human feeling and human touch. So, when you get the chance know that you’re there to serve people, human beings,” President Kufuor advised.

Chair of the Management Division at the University of Columbia Business School, Prof. Stephen Meier who is expressed his excitement at the opportunity for his team to engage the former president and Kufuor Scholars. “We have learnt a lot and I hope this collaboration will open more opportunities for our students” he said.

Founder of the Heritage and Cultural Society of Africa Foundation Ambassador Johanna Svanikier who escorted the foreign delegation thanked the president for helping promote African heritage and culture for social and economic progress. “We are excited to partner the John A. Kufuor Foundation,” she said.

Chief Executive Officer of the John A. Kufuor Foundation, Prof. Baffour Agyeman-Duah explained to the US delegation that the Kufuor Scholars Program (KSP) is a leadership and mentorship program for young people in Ghanaian Universities.

It aims to add value to the formal education they get at the tertiary level by providing specialized orientation through programmed mentorship, skills development, and experiential activities. The program has the objective of producing leaders imbued with a strong sense of patriotism.

“The program started in 2015 and seeks to empower them with ethical problem-solving skills,” he said.

Ms. Abigal Yayra Asafo and Mr. Patrick.A. Akubilla who are both Kufuor Scholars expressed their excitement at the opportunity to engage colleagues from other parts of the world.

“This meeting has been an eye opening one; having a conversation with students from University of Columbia Business School, USA and exchanging ideas and networking is a good move,” one of them said.